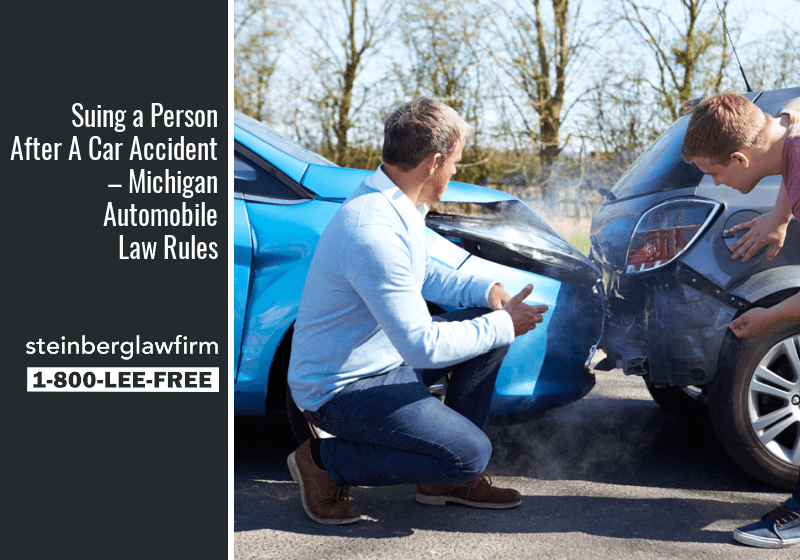 Getting into a car accident or truck accident in Michigan is different than in other states. Because Michigan is a no-fault state, there are certain rules and requirements that exist in Michigan that are don’t exist elsewhere. And the differences start right after the crash, from who pays for the medical bills to who fixes your car to who pays for pain and suffering for injuries.

Because of the no-fault law, figuring out who you can sue after a car accident and for what is not so straight forward. This article sets to explain Michigan car accident law in more detail and outline the rules.

In Michigan, there can be three different claims following a car wreck or big truck accident. The first claim is a Michigan no-fault claim, or first-party PIP claim. This claim is against a car insurance company and includes payment of medical expenses, lost wages, out-of-pocket expenses and other similar benefits stemming from a car accident injury.

The second claim is a pain and suffering claim. Under the law, this case is against the negligent driver, car owner or other potential defendants who caused the accident. Under the Michigan No-Fault Law, a person who is at least 50% at-fault for causing the crash can be sued for the injuries they cause. This is the same as in other states. However, in Michigan the person who is injured must have a threshold injury to be eligible to receive compensation for their pain and suffering.

To prove a threshold injury, the injured person must prove he she has a “serious impairment of body function.” In other words, the injury must be significant enough that it just generally changed a person’s ability to lead a normal life. The threshold is not very high, but the injury must involve more than bumps and bruises.

The third claim is the property claim for the vehicle damage. Michigan’s mini-tort law permits the victim of a crash to file a lawsuit against the at-fault driver and receive up to $3,000 for repair costs.

In a case for pain and suffering, you can use the driver who caused the accident. However, the liability must be established. This means the at-fault driver must be at-least 50% at-fault for causing the accident. In many situations, such as a rear-end accident, this is not difficult to prove and the police report will act as a guide in explaining who was at-fault for the crash and why.

Can I sue the car owner?

Yes. Under the Michigan Owners’ Liability statute, MCL 257.401, the owner of a car that is negligent in causing the accident can also be sued so long as the owner gave permission to the negligent driver in operating the vehicle when it caused the crash. Under this rule, the owner is liable if the car was being driven with his or her express or implied consent or knowledge. This consent is presumed when an immediate family member is driving the vehicle – such as a spouse, father, mother, sibling or child.

What can I sue for from a negligent driver?

As explained above, the negligent driver and owner is responsible for paying the pain and suffering caused from the crash, so long as the crash victim proves he or she has a “serious impairment of body function.”

However, the Michigan no-fault law changed in 2019. Under the new law, many motorists have limited PIP or medical coverage. This means, the auto insurance carrier only has to pay the medical bills up until the coverage limit is exhausted. Some folks who are eligible don’t even have PIP coverage at all.

In these situations, the injured person can place outstanding medical bills and lost wages on the at-fault driver and owner as part of the negligence claim. So now under Michigan law, a person can use for both medical bills, lost wages and pain and suffering when injured in a car or truck accident when PIP benefits run out.

How much can someone sue for a car accident?

Besides the mini-tort limit of $3,000 for the vehicle damage repair costs, there is no limit to what you can sue the other driver for injuries related to a car accident. However, the reality is a case for pain and suffering or outstanding medical expenses is limited by the amount of insurance involved.

Given the fact that injury victims can now sue a person for not only pain and suffering, but also all medical expenses that result from a collision in Michigan, it is advisable for all drivers to purchase at least $250,000 in coverage to protect themselves. And if they have assets to protect, such as a house, then a much higher limit should be selected or an umbrella policy purchased to protect against a horrible mistake.

Who pays the medicals bills following the car accident?

First, a driver or passenger always starts with their own car insurance first. For example, if a person is injured in a crash and that person has GEICO Insurance, then GEICO must pay the medical bills related to the crash.

If there is no car insurance in the household, then a claim must be made with the Michigan Assigned Claims Plan. This Plan is managed by the car insurance industry. An application must be completed and delivered to the MACP and the Plan will assign a car insurance company to pay the medical bills and other outstanding benefits, up to a $250,000 cap.

However, there is one major caveat. If a car owner’s own uninsured vehicle is involved in the accident, then that owner cannot make a no-fault claim. This is true even if the other car caused the crash. In fact, the uninsured owner cannot even make a claim for pain and suffering. This is a very harsh rule, and it effects people injured in Michigan car accidents on a daily basis. This is why it is so important to insure your car before driving it on a Michigan roadway.

The order for who pays medical expenses is the same for pedestrians, bicyclists and other non-occupants – (1) own car insurance, (2) the auto insurance of a resident relative, the (3) Michigan Assigns Claims Plan.

What do I do if the at-fault driver is uninsured?

The reality is that more than 20% of Michigan drivers are uninsured. In many parts of the state, that number if much higher. If an uninsured driver caused the crash, you can sue him or her but getting compensation from them will be extremely difficult. However, if you have “uninsured motorist” coverage – or UM coverage, you can file a claim against your own auto insurance company for pain and suffering compensation.

In some cases, you can file a UM claim even if you don’t have UM insurance. So long as the vehicle you occupied maintains uninsured motorist insurance, then the occupants of that vehicle who are injured in a crash can make a claim for pain and suffering compensation through the UM policy. However, the insurance policy itself will describe whether occupants can obtain UM coverage.

What if the at-fault driver doesn’t have enough insurance?

In many situations, the injuries from a car accident are worth more than the insurance the at-fault driver or car owner carries. What can you do in that situation? If this is the case, then you can turn to your own auto insurance carrier by making a “underinsured motorist” claim – or UIM claim. UIM coverage is not mandatory, so it all depends on whether or not the injured person has the coverage or not.

Again, like an uninsured motorist claim, sometimes the vehicle will have UIM coverage and cover the occupants involved in the crash. The insurance policy controls and contacting an attorney to investigate this is important.

The Lee Steinberg Law Firm has helped Michigan car accident and truck accident injury victims for over 40 years. We have obtained hundreds of millions for our clients, helping victims in Detroit, Saginaw, Grand Rapids, Traverse City and all points in between.