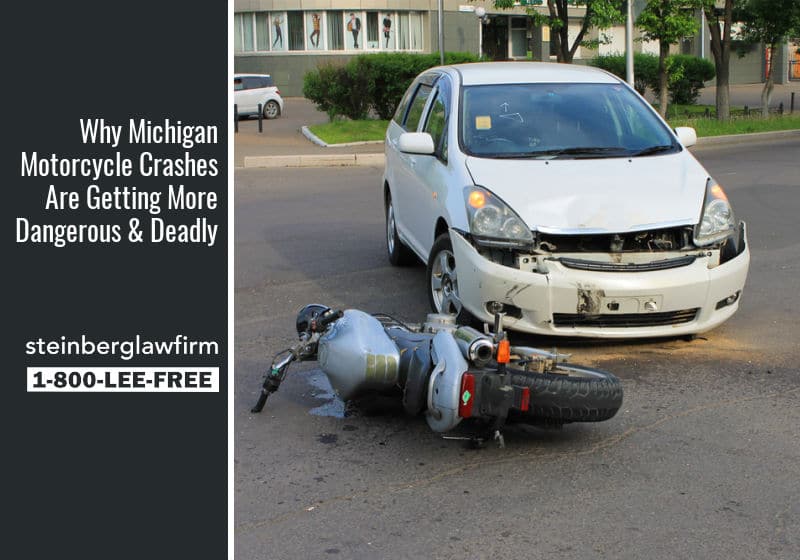 The Skilled Motorcyclist Association – Responsible, Trained and Educated Riders, Inc. (SMARTER) has released data reported annually by the Michigan State Police Traffic Crash Reporting Unit and The National Motorcycle Institute Fatality Reporting System on the most recent motorcycle crash trends and fatality statistics in Michigan. The report sounded the alarm that although the number of motorcycle crashes has slightly declined across the state, there is a trending increase in motorcycle rider fatalities and the seriousness of motorcycle crash injuries.

According to the National Highway Traffic Safety Administration, motorcycle helmets reduce the risk of death by 42% and head injury by 69% in riders who crashed.

Motorcyclists are 35 times more likely to die in a roadway accident than those in other vehicle types. For those who survive, motorcycle accident injuries can range from mild road rash and burns and scarring to severely broken bones and traumatic brain injuries.

Metro Detroit areas, including Wayne, Oakland, and Macomb counties, average more than three motorcycle-vehicle crashes every day in peak riding season during May-September, with nearly half occurring on weekends, after 6 p.m. The motorcycle accident injury attorneys at The Lee Steinberg Law Firm, P.C. also see many car and truck accidents involving motorcycles on I-75 and along some of the more significant expressway corridors that connect I-94 or I-96. However, most motorcycle crashes are happening closer to home and on local community streets rather than the busiest and most congested Michigan roads.

No matter if you are in Detroit, Lansing, Kalamazoo, or Grand Rapids, we encourage everyone to review information about motorcycle safety at Michigan.gov/LookTwice.

Suppose a motor vehicle is involved in a motorcycle accident. In that case, this is the only way an individual injured while riding or a passenger of a motorcycle can collect Michigan no-fault benefits.

Example: A motorcycle hits the curb because the rider was distracted. Unfortunately, even if the rider sustains a severe injury, they cannot claim Michigan no-fault benefits because a motor vehicle was not involved in the accident.

Now, if a motorcyclist hits a moving vehicle in the middle of an intersection, the motorcyclist can make a claim for no-fault benefits. Physical contact with the motor vehicle is not required.

Example: A motorcyclist is forced to drop their motorcycle before hitting a car or turns away from an oncoming car to avoid being hit. The motor vehicle is still considered to be involved in the accident, and the motorcyclist may make a claim.

If you have questions about claiming your motorcycle accident injury, how the Michigan no-fault law works, or how your motorcycle insurance works and applies to injured motorcyclists, the team at the Lee Steinberg Law Firm, P.C. is experienced and ready to help.

What Is My Motorcycle Case Worth?

If someone dies in a motorcycle accident, surviving family members can file a wrongful death lawsuit. However, there is no magic formula for determining how much a motorcycle crash or personal injury case is worth.

If you or a loved one has been involved in a Michigan motorcycle crash, our motorcycle accident and wrongful death attorneys know you need to focus on healing. Call The Lee Steinberg Law Firm, P.C. toll-free at 1-800-LEE-FREE (1-800-533-3733) for a free, no-risk consultation. We will be right there.