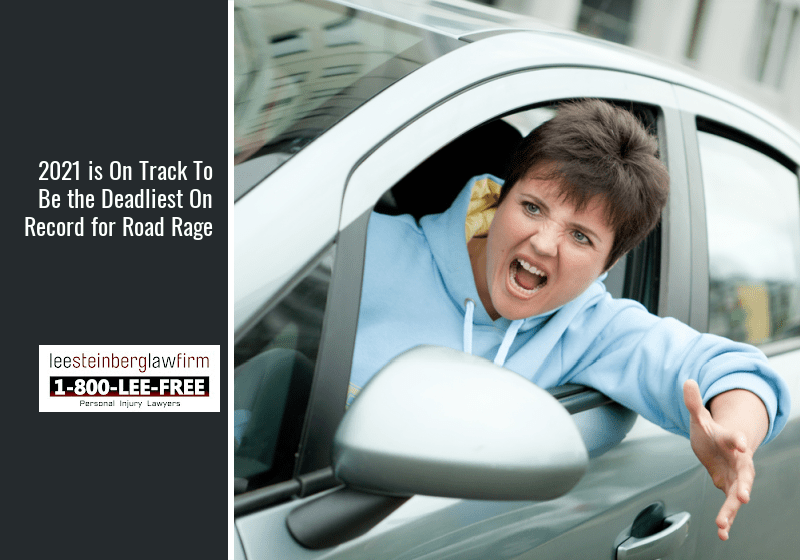 It’s safe to say that the past two years have been difficult for many, if not most individuals. When stress and tensions are high, we often take our frustrations out in a variety of ways, including our driving. Unfortunately, this means that incidents and car accidents involving road rage are at an all-time high and are only expected to get worse.  A victim of a road rage car accident should consult with a car accident lawyer immediately to discuss the potential of a personal injury or wrongful death claim. At the Lee Steinberg Law Firm, we have experienced lawyers ready to help.

According to the AAA Foundation for Traffic Safety, aggressive driving is a factor in nearly 56% of all fatal crashes. And after conducting a survey in 2019, they found that 80% of drivers had expressed a significant amount of anger, aggression, and road rage while driving. Considering that these numbers are from previous years and that our stress levels have only increased since then, it’s no surprise that road rage is not only becoming more and more common, but the reactions people are having are becoming more aggressive and violent.

A recent news report in the state of Michigan reported several traffic incidents involving aggressive driving and road rage leading to gunfire. In the report, Michigan state police commented that people are pulling out their guns over something as simple as not using a turn signal. The station also reached out to the organization Every town for Gun Safety and found that deaths and injuries from road rage have nearly doubled in 2021, with an estimation of one person being injured or killed in a road rage shooting every 18 hours.

What is Road Rage?

Aggressive driving, or road rage, is a willful negative action that puts others at risk. More specifically, road rage is defined as any person operating a vehicle with the intent to harass, intimidate, obstruct, or annoy another person or driver. Road rage can cause pedestrian accidents, bicycle accidents, and motorcycle accidents. The Lee Steinberg Law Firm handles these types of personal injury claims in Detroit and throughout Michigan. It is important to contact an accident lawyer if you are a victim of road rage.

However, aggressive driving and road rage can sometimes have different meanings. The NHTSA defines aggressive driving as reckless driving involving such things as speeding and tailgating or blocking another vehicle. In contrast, road rage includes the above with the addition of violent intent. Essentially, once you move from having an intent to annoy or aggravate to having an intent to actually harm another person, then you are considered to be exhibiting road rage.

Depending on the individuals involved, aggressive behaviors and road rage can vary. No two people deal with stress and anger the same way. However, the following are some of the more commonly seen behaviors and actions that indicate a person is driving aggressively and experiencing road rage:

There are several factors that can lead to incidents of road rage depending on the person or persons involved. Though sitting in traffic is one of the most common issues that leads to aggressive driving and road rage, there is often something going on at a deeper level that triggers these incidents. Usually, personal issues and high levels of stress, emotional strain, and frustration over something other than traffic conditions contribute to aggressive driving.

The past two years, for example, and the stress of dealing with the pandemic in Detroit and Michigan have undoubtedly led to the increase in road rage accidents that are now being reported. However, some individuals are more prone to aggressive behaviors and can simply be triggered by their own impatience while sitting in traffic or when getting stuck behind a slow-moving person or vehicle.

According to data collected by Bankrate from various sources:

Do Gender and Age Play a Role in Road Rage?

These days, we’re all a little on edge, and with tensions running high, we are starting to see more and more cases of road rage accidents leading to injuries. If you or a loved one has been the victim of a road rage incident, the team at Lee Steinberg Law Firm can help you get the compensation that you deserve. We care about the safety of our clients and Detroit roadways which means holding those responsible for causing accidents accountable. Call our metro Detroit and Michigan personal injury lawyers at 1-800-LEE-FREE (1-800-533-3733) to speak with an experienced attorney. You’ll pay nothing until we settle your road rage case