Here are the Biggest Michigan Driving Myths - We Have the Answers!
Skip to content 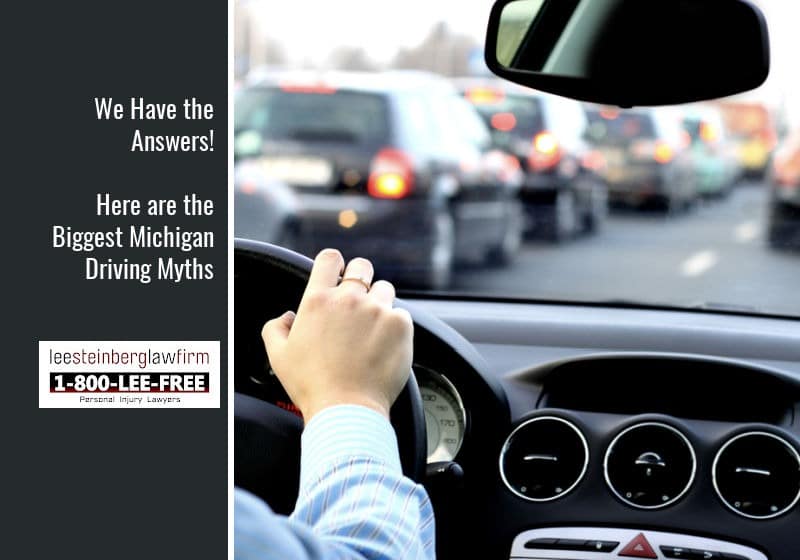 Myths are rampant in our society no matter what topic you’re discussing, but traffic law myths are especially common. This is likely due to the fact that we spend so much of our time in our cars commuting to and from work, running errands, and visiting family and friends.

Some of these myths may arise due to varying state laws or from things that were once illegal but now are not. However, some of the most common myths are perpetuated by people that are simply trying to keep themselves and others safe while driving.

Today, we’re going to take a look at some common myths surrounding driving in Flint and around Michigan. To ensure you truly are staying safe and following the rules of the road, it’s important to know what is true and what is not. If you’re ever in doubt or find yourself in an accident as a result of a questionably negligent act, you can always consult with a local Michigan accident attorney.

Myth: It’s Illegal to Drive With Your Interior Lights On

False: There are no laws in Michigan or any other state that say you are not allowed to drive with your overhead lights on. Though you’ve likely been in a car many times and heard someone say to turn the light off so you don’t get pulled over, this is entirely untrue. This myth likely stems from the notion that it is difficult to see while driving with interior lights on. While it is recommended that you do not have the lights on inside your vehicle while driving, it is not technically considered an illegal act.

Myth: U-turns are Illegal in Michigan

False: U-turn laws vary from state to state, but in Michigan, there is no law that prohibits drivers from making u-turns. However, this myth is not entirely made up, as there are some states that do have regulations against u-turns. Additionally, though u-turns are generally allowed in Michigan, they are illegal if you do so when there is a sign specifically stating that it is not allowed at that intersection.

False:  Michigan Lefts were developed to improve traffic flow and safety. These restrictions do prohibit drivers from making left turns and u-turns in certain areas, which can be frustrating for drivers, but ultimately, they are necessary and reduce accidents rates. Studies have shown that turning right and then making a u-turn in a safer spot helps keep traffic moving and reduces the chances of an accident occurring.

False:  You’ve likely heard this one a million times before, especially during the summer months. However, the notion that it is illegal to drive without shoes on is one of the most prevalent myths floating around. Similar to the interior light myth, the driving barefoot statement likely comes from the idea that some people might not drive as well if they aren’t wearing shoes—but this is an entirely subjective statement. You can operate a vehicle barefoot, but it is possible that some may find it easier to control the brake and gas pedals with the support of a pair of shoes.

False: You can have tinted windows in Michigan, but there are specifications. You may not have all of your windows tinted, for example. Only the rear window and backseat windows may be tinted. However, exceptions can be made if a driver has a letter from their physician stating their need for tinting—but this is rare. Tinting should not restrict a driver’s ability to see outside of the vehicle, but it also should not restrict authorities from seeing inside should they need to.

Myth: Riding in the Bed of a Truck is Not Allowed

True and False: Michigan law prohibits anyone under the age of 18 from riding in the open bed of a truck when it is traveling more than 15 mph on a public road. Even if you are over 18, however, it can be extremely dangerous to ride in the bed of a truck, especially if it is moving faster than 15 mph on roads surrounded by other vehicles.

If you or a loved one are injured in an accident as a result of someone else’s negligent driving, you have a right to file a personal injury claim to recover damages. Whether a certain action is illegal or not, if someone is doing something that causes them to lose control of their vehicle or distracts them from driving, they can be held liable for any accidents that occur as a result.

For over 40 years, our team has been helping victims of car accidents prove fault and get the compensation they deserve. We are dedicated to advocating for your rights and ensuring all negligent parties are held accountable for their actions.