Can I Still Sue In a Hit and Run Accident? | Lee Steinberg Law Firm
Skip to content 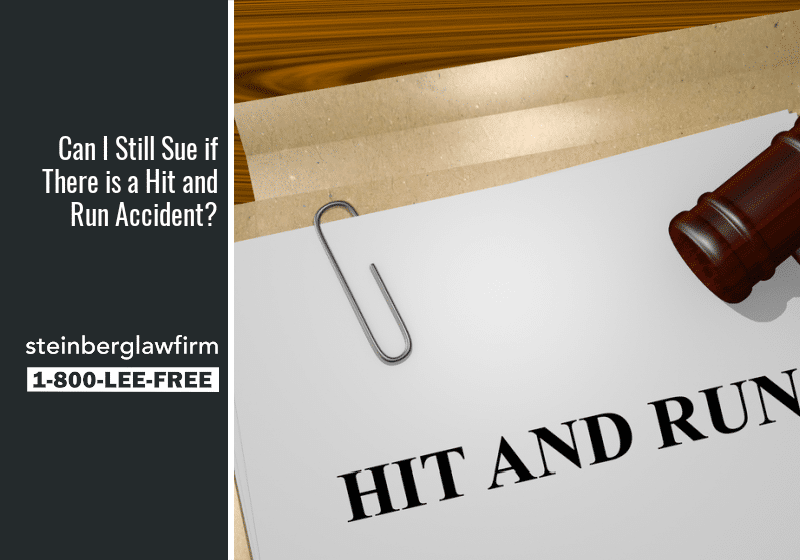 Some of the most common car crashes and truck accidents in Michigan unfortunately involve hit-and-run vehicles. People who cause hit-and-run accidents choose to leave the accident scene for any number of reasons. This can range from having an outstanding warrant, outstanding fines, fear of getting blamed for the accident, fear of having to pay the car damage to not have any car insurance.

With so many uninsured motorists driving their cars on Michigan roadways, there are bound to be both minor and severe accidents involving uninsured drivers. When this happens, and a person is injured due to the negligence of an uninsured driver, a question is often asked – how can I get compensated for my injuries if I was hit by an uninsured driver or involved in a Michigan hit-and-run crash?

The answer is they can’t and most likely won’t. But that doesn’t mean that’s the end. Instead, individuals injured in a car accident in Detroit, Saginaw, Grand Rapids or anywhere else in Michigan that involves a hit and run accident, or an uninsured vehicle can turn to their own auto insurance, or the auto insurance of the vehicle they were in, for compensation.

And the way to do this is by filing what’s known as an Uninsured Motorist claim, or UM claim.

What Is An Uninsured Motorist (UM) Claim?

Uninsured motorist claims entail filing an insurance claim with a car insurance company for uninsured motorist (UM) benefits. UM benefits cover the pain and suffering a person is going through following a car crash. UM benefits can also include the payment of medical expenses, lost wages and other financial losses in certain situations, most notably if there is no PIP coverage.

An uninsured motorist claim can be set up by simply calling the auto insurance company and making a claim, much like a person makes a collision claim for the car damage following an accident.

How Do I Know If I Have Uninsured Motorist (UM) Coverage?

Unfortunately, under Michigan law UM coverage is not mandatory. This means that you have to specifically purchase this form of coverage when buying car insurance to be able to take advantage of its benefits. If you are injured in your own vehicle by an uninsured driver, and you do not have UM coverage, then you cannot make a UM claim (unless another vehicle you own or a resident relative has uninsured motorist coverage on their vehicle).

The way to find out if you have UM coverage is by looking at your declaration page at the beginning of your automobile insurance policy. In Michigan, the declaration page – also known as the dec page – will list out your insurance coverages. These coverages can look like:

The item to look for on the dec page is the coverage that says uninsured motorist coverage. If you do not see it listed, then you do not have it.

Another way to check is to simply call your insurance agent or the car insurance carrier itself and ask if you have UM coverage.

Can I Still Make an Uninsured Motorist Claim If I Don’t Have UM Coverage on My Policy?

Yes, in some instances you can still make a claim for Michigan uninsured motorist benefits even if you did not have UM coverage or even any car insurance at all. To do this, you must turn to the insurance company for the vehicle you occupied when the collision happened.

If the vehicle carried UM coverage, then you may be able to make a claim through that car. This is true even if the vehicle is owned by someone you don’t even know.

Because an insurance policy is nothing but a big, long contract, whether a person occupying a vehicle that is hit by an uninsured driver can get UM benefits through that vehicle’s car insurance company depends on what the policy says. Some policies allow an occupant to make a UM claim. Some do not.

Because of this, it is important to call an experienced Michigan uninsured car accident lawyer if you have been injured following a crash with an uninsured or hit-and-run driver. The lawyer can obtain the various insurance policies and see if you are eligible. Because come car insurance companies have strict deadlines to make a claim, you should call a Michigan hit-and-run accident lawyer as soon as possible after the crash.

What Does Uninsured Motorist Benefits Cover?

In situations where an injured person has opted out of all personal injury protection (PIP) coverage, then an injured person can have their hospital bills, doctor bills, lost wages and other expenses paid through the uninsured motorist claim.

Who is the Defendant in an Uninsured Motorist Claim?

The defendant in an uninsured motorist claim is the auto insurance company. For example, say you were hit by a hit-and-run driver and you had insurance through State Farm. Because of the accident you sustained a whiplash injury that included low back pain, shoulder pain and other ailments. If you have UM coverage, you can turn to State Farm for payment of your injuries.

If State Farm does not step up and do the right thing, then you file a lawsuit against State Farm for the benefits you are entitled to. A law firm that specializes in Michigan hit-and-run accidents or uninsured motorist injury cases can walk you through the process. They are typically very similar to normal negligence cases, although there are major differences.

Getting hit by a hit-and-run vehicle is very frustrating. It can be infuriating that a person can be so reckless in causing the collision, but then adding insult to injury when fleeing the scene. The Michigan hit-and-run accident lawyers at the Lee Steinberg Law Firm can ease the frustration, walking you through the process and obtaining a large money settlement for you and your family.