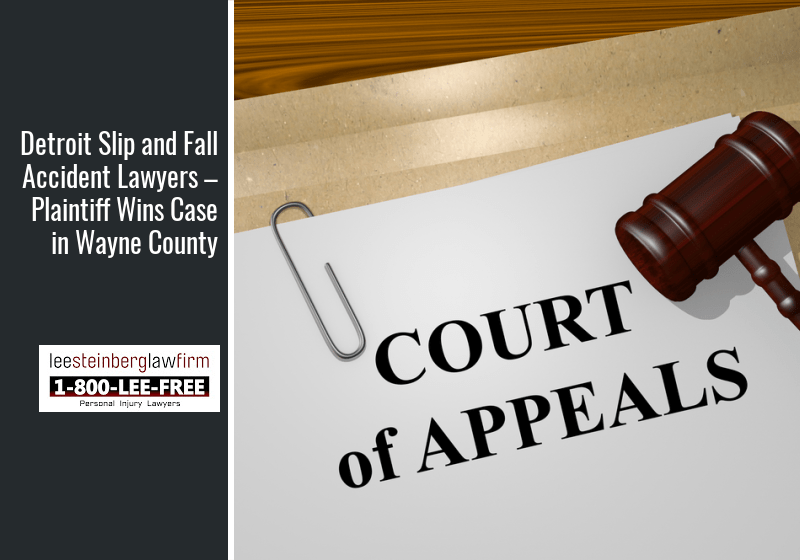 Slip and fall cases in Detroit are not easy. Lawyers who handle these cases know the pitfalls, which include proving negligence, notice on the part of the defendant. The open and obvious defense is also a major obstacle for people injured in a slip-and-fall or trip-and-fall accident on private property.

But the Court of Appeals just released an interesting case that does helps plaintiffs and those injured in a slip and fall because of the negligence of a landowner or building owner.

In Shalda v. Redico, LLC, docket no. 353211 (unpublished, 7/29/2021), a woman who worked in an office building in Detroit tripped and fell on a floor mat in front of an elevator as she attempted to get exit. A couple of minutes earlier, two employees of the building were wheeling carts filled with equipment through the second-floor elevator lobby. Surveillance video showed that as the cart rolled over the floor mat, a section of it bunched up slightly. A few seconds later, another cart crossed over the floor mat and increased the roll in the floor mat.

The plaintiff filed a lawsuit in Wayne County for her injuries. The defendants, the property manager and owner of the building, filed a motion to have the case dismissed. They argued that what the plaintiff tripped over was “open and obvious.” The trial judge agreed and dismissed the case. However, in a split decision the Michigan Court of Appeals reversed the Wayne County judge’s decision, allowing the Ms. Shalda to move ahead with her slip and fall case for monetary damages.

What is Open and Obvious Mean Under Michigan Law?

Under Michigan law, a premises owner has a duty to make sure a building does not have unreasonably dangerous conditions. This duty also includes warning of known dangers and a duty to inspect the premises and make any necessary repairs or warn of any discovered hazards.

However, this duty does not extend to hazards that are considered “open and obvious.” A condition is considered open and obvious if an average user with ordinary intelligent would have been able to discover the danger and the risk presented upon casual inspection.

If a court believes a person should have discovered the danger, then it is considered open and obvious and the premises owner has no duty to get rid of that hazard. And if the landowner has no duty, then they did not commit any negligence and the plaintiff loses the case.

But What Does Casual Inspection Mean?

The key phrase in the definition of open and obvious is “casual inspection.” What does this mean. Unfortunately, the law has not provided any definition and this phrase has been interpreted in a thousand different ways over the past 20+ years.

In most situations, judges have interpreted “casual inspection” to me that if a person could have seen the hazard, then that’s casual inspection and the open and obvious rule applies. Because of this reality, most slip and fall cases either never make it to court or get dismissed by the trial judge.

The Shalda Case Highlights the Trouble with Casual Inspection

In reversing the trial judge’s decision to apply the open and obvious rule and dismiss the plaintiff’s case, the Michigan Court of Appeals in Shalda discusses the difficulty with “causal inspection” and how it is interpreted.

The Court explained that if you looked at only the surveillance video, the rumpled carpet was very clear. But this camera angle differed considerably from what the plaintiff encountered while getting off the elevator. The Court said hazards viewed from different angles, especially differences in the height between objects, may be more visible from one angle than another.

The Court also commented on how multiple people came across this same hazard and did not see it. Based on this, there is an inference that the defect was not apparent upon casual inspection and the open and obvious rule does not apply.

This reasoning is very important and frankly quite refreshing. For the past 20 years, judges have turned “casual inspection” into almost no inspection. Basically, if the any person could have seen the defect, then that was enough to make it open and obvious.

But the panel did not do this in this case, Instead, they actually analyzed the surveillance video and what occurred that day to arrive at conclusion that the raised carpet may not have been apparent to Ms. Shalda that morning. By doing this, they gave the plaintiff a chance and now she can pursue her case in front of a Wayne County jury.

The Lee Steinberg Law Firm has proudly represented individuals injured in a slip-and-fall or trip-and-fall case for over 40 years. We only represent people, never corporations. Our team of tested Michigan slip and fall attorneys will assist you every step of the way, winning you compensation for lost wages, medical bills and pain and suffering.