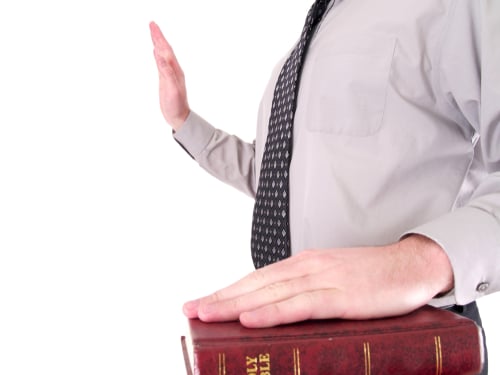 How Do Insurance Carriers Defend Claims?

Insurance carriers live to dispute claims. They take your hard-earned money, then delay, deny and eventually defend when a lawsuit is brought against them. Michigan injury attorneys know this scheme all too well, and it is why we fight everyday for our clients.

One of the many ways they defend claims is by asking the policyholder or insured to submit to an “Examination Under Oath” or EUO. EUOs are creature of the insurance contract. When you purchase car insurance, homeowner’s insurance or basically insurance of any kind, you are binding yourself to a contact. The terms of that contract will dictate the duties you, as the insured, must follow in order to take advantage of the benefits the insurance contract provides.

Just about all car insurance policies in Michigan contain a contract clause requiring the policyholder to submit to a EUO if asked. The EUO is usually a precondition to receiving Michigan no-fault benefits following a car accident. If you refuse to submit to the EUO, the insurance company can say you are in violation of the contract you purchased and deny your claim.

What is an Examination Under Oath?

So what exactly is an Examination Under Oath? An EUO involves testimony taken under oath between yourself and a lawyer for the insurance company. EUOs are like a deposition before the case is in litigation. When an EUO occurs, no lawsuit has been filed yet and no formal discovery has occurred. But the insurance company wants to find out various information about the claims the plaintiff is making and why.

Your attorney may be present for the EUO, but it is different than a normal deposition. The plaintiff attorney is precluded from interfering too much into the questions posed by the insurance lawyer. Standard objections to questions by the plaintiff’s lawyer can be made, but they are treated differently than in cases filed in court. A court reporter will be present to make a transcript. After it is done, a transcript can be ordered and mailed to each party. The testimony that is elicited can be used later on when a lawsuit is filed.

When Does an EUO Happen and to Whom?

EUOs are typically scheduled in Michigan first-party no-fault car accident claims. This is because a no-fault claim is essentially a breach of contract claim between the claimant and the car insurance company.

Because an EUO is a creature of contact, only policyholders or named insureds are required to submit to them. So if you are a passenger and injured in a car accident, and you are asking for no-fault benefits to be paid by the insurer for the vehicle you occupied at the time of the accident, you don’t have to submit to an EUO. The reason is simple. A passenger is not a policyholder and thus not a party to the contract.

How Do We Handle EUOs?

Because EUOs rarely resolve anything, I rarely allow them to proceed. At one time, a long, long time ago, they were useful tools for insurance carriers to get a better handle on a claim so they could more quickly pay it on behalf of our clients. However, today EUOs are utilized by insurance lawyers as a blunt force object to deny payment. The utility and usefulness for them has mostly gone out of the window unfortunately.

The Michigan car accident injury lawyers at the Law Offices of Lee Steinberg, P.C. have been handling insurance claims for our clients for decades. We fight for our clients every step of the way. Whether you live in Detroit, Grand Rapids, Lansing, Traverse City or Saginaw, we come to you.