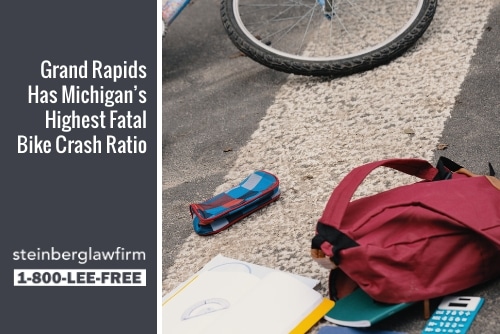 For more than a decade, Grand Rapids, Michigan, a Kent County city of 200,000 people, has been busy working to create a safe bicycling infrastructure. Yet, the community has a fatal bike crash ratio that is almost three times higher than the state average. Because of this alarming fact, the Michigan Department of Transportation (MDOT) has been partnering with the City of Grand Rapids and more than 40 of its local stakeholders for “Driving Change,” to promote bicyclist safety. Together, crash analyses have been conducted, including the evaluation of programs, activities and communication, and surveys and data collected to help understand the cause behind the issue. In 2015, information and statements by individuals who use Grand Rapids roads and bike paths concluded they:

According to the campaign FAQ, the most common place for a crash to occur in Greater Grand Rapids is at an intersection on major roadways such as:

Busy intersections, drunk drivers, inattentive and distracted drivers, as well as motorists who speed or drive too close to bicyclists are some of the leading causes behind those crashes.

Bicyclists Who Travel on the Road vs. Sidewalk Reduce Fatal Crash Outcomes

In the summer of 2016, the “Driving Change” campaign conducted surveys with Grand Rapids residents. Bicyclists entering or crossing roadways from the sidewalk or driveways is a leading cause of crashes, but only one-third of community members believe sidewalk riding is likely to lead to an accident. The perception that riding a bicycle on the sidewalk is safer than riding on the road was still very much prevalent among drivers who:

These groups are also the majority of cyclists who are injured or hurt in related motor vehicle crashes most often. Still, all riders should be following these easy rules for bike riding from the city’s “Driving Change” campaign.

Motorists are Responsible for Watching Out for Bicyclists Too

Drivers of motor vehicles, including motorcycles, need to take especially close care of bicyclists when making a right-hand turn. These crashes frequently happen when cars are turning at intersections or driveways and when bicyclists are coming from behind their vehicle.

As of September of 2018, a new law requiring Michigan drivers to give a minimum of 3-feet of room while passing bicyclists on roadways was enacted. PA 279 requires a motorist attempting to overtake a bicyclist traveling in the same direction to the left of the vehicle give at least three feet of distance to the right of the bicyclist until they have safely cleared the bicyclist.

The “Driving Change” program was recently honored at the Michigan Governor’s Traffic Safety Advisory Committee’s 2018 awards and also recognized by the National Highway Traffic Safety Administration’s (NHTSA’s) 2018 Pedestrian and Bicyclist Assessment. The program is funded primarily through a $632,000 federal grant to the Michigan Department of Transportation in partnership with the City of Grand Rapids.

What other bicycle heavy communities in Michigan do you think could benefit from the “Driving Change” campaign?

Our attorneys at The Lee Steinberg Law Firm have represented bicycle accident victims and their families for over 40 years and are experts on these cases. If you have lost a loved one as the result of a car crash involving a bicycle, our team of experienced attorneys is here to answer any questions you may have. Please call Lee Free and our bicycle accident attorneys at 1-800-LEE-FREE (1-800-533-3733) or fill out the Free Case Evaluation Form. And remember, you pay nothing until we settle your case.

The Lee Steinberg Law Firm has represented clients throughout the Grand Rapids area and Kent County and surrounding communities for over 40 years. Give us a call. It is a free consultation. We’re here to answer your questions and we’re ready to win your case.

Also read: Common Bike-Car Collisions and Tips for Bicyclist to Avoid Them