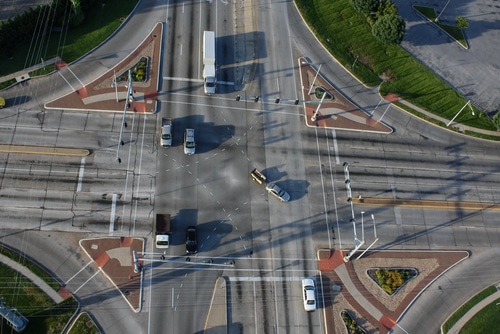 The Federal Highway Administration (FHWA) reports more than 50 percent of the combined total of fatal and injury crashes occur at or near intersections. Whether you are a driver, passenger, cyclist, pedestrian or anyone else who uses Metro Detroit roads, several intersections in the area have been described as the worst. These intersections are home to the most common crashes often creating severe consequences and traumatic injuries for those involved. Michigan State Police show these most dangerous intersections last year (2016), ranked by total crashes:

Knowing how to minimize your chance of a crash at one of these intersections starts with understanding what makes an intersection crossing dangerous.

What Makes an Intersection Dangerous

Like most accidents, intersection wrecks can be prevented if more drivers followed some simple rules. Here is a review of the most common reasons accidents occur at the cross section of roads.

Common injuries that intersection accident victims may suffer include traumatic brain or spinal cord injuries, knee and feet injuries, whiplash injuries from being thrown forward and backward in the vehicle, seatbelt rash, severe burns and bone fractures. Sadly, some 20 percent of fatal collisions occur in intersections.

It’s imperative Michigan drivers become more aware of their surroundings when driving through these intersections and make good choices on how to drive more patiently with the safe intersection driving lessons outlined below.

If everyone followed some of these driving lessons, Metro Detroit could see improvements in accidents rates. With that said, courteous driving will remain to be the most important measure toward improving the city’s problem intersections. Have you experienced an accident at any of these dangerous Metro Detroit intersections? Do you have other areas you would add to the list?

Working with insurance companies to ensure you get the compensation you deserve can be frustrating and confusing. They often like to shift some or all of the blame for the accident to the injured plaintiff. The Lee Steinberg Law Firm can help. Please call Lee Free and speak to our car accident attorneys at 1-800-LEE-FREE (1-800-533-3733) or fill out the Free Case Evaluation Form. And remember, you pay nothing until we settle your car accident case.