Know Michigan Slip and Fall Law. How Much is Pain & Suffering Worth?
Skip to content 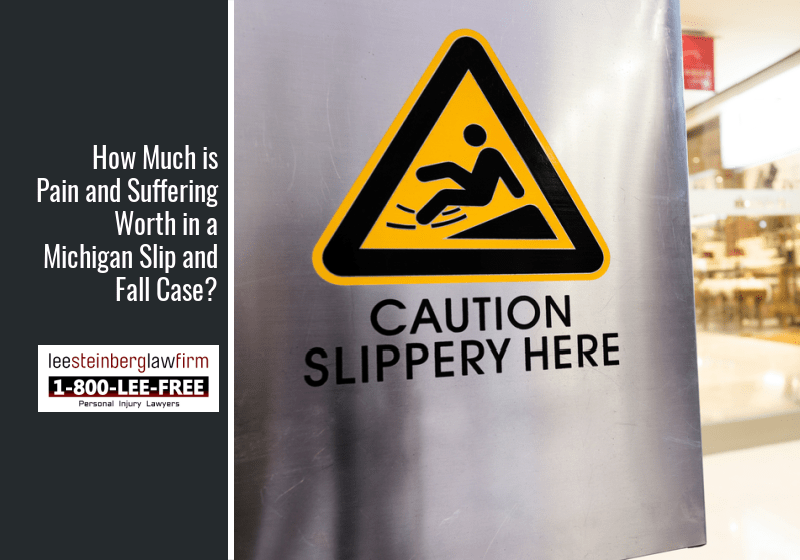 Things You Should Know About Michigan Slip and Fall Law

Slip and fall accidents are one of the most prevalent type of personal injury. Every year, thousands of people in Detroit, Flint, Saginaw, Grand Rapids and other areas in Michigan are injured due to a slip-and-fall accident or trip-and-fall accident. Whether it is slipping on water inside a store, slipping on black ice in a parking lot, or falling on a porch or staircase at a rental, these accidents are painful and can result in horrible injuries.

The general rules for Michigan slip and fall cases, also known as premises liability cases, is very similar to other states. Under Michigan law, a premises owner owes a duty to an invitee – like a customer at a store – to exercise reasonable care to protect the invitee from an unreasonable risk of harm caused by a dangerous condition on the land.

In addition, if the landowner knows, or by exercise of reasonable care should have known of the dangerous condition, and realizes this condition involves an unreasonable risk of harm to invitees, then the landowner can be held responsible.

A store owner or landlord cannot allow dangerous conditions to fester and remain. If the danger is unreasonable, like a puddle of water from a faulty refrigerator at a grocery store, and the store owner knew or should have known about this dangerous hazard, it can be held responsible for injuries resulting from the puddle of water.

However, there are defenses store owners and landowners can use to combat slip and fall lawsuits in Michigan. One of the biggest defenses is called comparative negligence. This is the negligence of the plaintiff, or the injured person. In other words, it’s the amount of fault that rests with the injured person for getting hurt because he or she was not paying attention.

Under Michigan law, specifically MCL 600.2959, if you are more than 50% at-fault for causing the fall, you cannot obtain pain and suffering compensation and the amount of economic damages you receive is reduced by your percentage of fault.

For example, if you slip and fall on black ice in a dark parking lot and a jury still says you were 51% at-fault for causing your own injuries, you cannot obtain and pain and suffering compensation. In addition, the amount of economic damage the jury may award – such as outstanding medical bills and lost wages – will be reduced by 51%.

Comparative negligence does make sense. People do have a responsibility to pay attention and not act recklessly while walking or doing an activity. But in Michigan, the defense can be quite powerful as it can eliminate the ability to get any money for pain and suffering.

A more powerful defense that property owners and their lawyers can use is the open and obvious defense. This rule is used almost all states, but Michigan takes the rule to a different level. The way Michigan courts have interpreted the rule have helped eliminate almost all basic slip and fall cases in Michigan. This is not true in most other states across our country.

The general rule is that a property owner is not liable for dangerous conditions that are “open and obvious”.

Under Michigan Slip and Fall law, a premises owner owes a duty to an invitee to exercise reasonable care to protect the invitee from an unreasonable risk of harm caused by a dangerous condition on the land. But this duty does not extend to dangers that are open and obvious.

Whether a danger is open and obvious depends on whether it is reasonable to expect that an average person with ordinary intelligence would have discovered it upon casual inspection.  If the person could have discovered the hazard, then the property owner owes no duty. And because he or she owes no duty, the plaintiff has no case for negligence.

The open and obvious rule has been applied in many ways. It applies in cases involving snow, ice, puddles of water, potholes, defective sidewalks, parking lots, rentals, and other situations.

Because the open and obvious rule is such a powerful tool for landowners and property owners to get a case dismissed, it is important to contact a knowledgeable and experienced Michigan premises liability or Michigan slip and fall lawyer so they can explain the law to you, answer your questions and investigate your case.

Although this is probably obvious, a person must be injured to pursue a personal injury claim from a slip and fall accident. Just because you fell, does not mean you automatically can get money. The plaintiff must prove an injury – or damages – that result from the fall. The types of injuries that can arise from a Michigan slip and fall or premises case include:

Because a plaintiff must show an injury to have a slip and fall injury claim, medical treatment is required. If you are hurt at a grocery store like Krogers, or fell at a gas station or on a rental property, it is important to see a doctor as quickly as possible. Even minor falls can be much worse than originally thought.

A hospital can run tests to rule out internal bleeding and internal injuries. Doctors can also decrease the severity of an injury and help shorten the recovery time.

Following up with your doctors after a fall is important too. A person can complaint until the cows come home, but without medical treatment to back up these complaints you won’t get very far in a personal injury slip and fall case in Michigan. So if the doctor recommends physical therapy, you should do it.

How Long Will Injury Last? Is it Permanent?

It is important to point out that the type of injury and the severity of the injury is also important in deciding the value of a slip and fall case. In almost all situations, a broken leg with surgery is obviously going to be more valuable to a jury and an insurance company than an ankle sprain.

But it’s not just the type of injury that is important. What is also important is how long the injury is suppose to last. If an injury is going to be permanent, if it’s going to cause arthritis in the future or stop a person from working, then the value of the case goes up dramatically.

An experienced Michigan slip and fall lawyer can meet with doctors or retain experts to demonstrate the severity of an injury and the effect it will have on a person’s life. This can make the difference between a small settlement and a large settlement. Our team of Michigan trip and fall and premises attorneys specialize in this.

And insurance companies and their lawyers know this. If a plaintiff is arrogant, or does a poor job explaining how the incident happened, or is lying about his or her injuries, this can reduce the value of the case.

On the other hand, insurance companies hate plaintiffs who come across as reasonable and likeable. They know a jury will like this person and be more willing to give more money to them.

Sadly, jurisdiction can matter. Jurisdiction is the venue or location of where the Michigan personal injury case occurred. In Michigan, usually you have to file the lawsuit in the county where the incident took place.

And the values a jury will place on a case can vary widely from county to county. Suburban and urban counties tend to give more money than rural counties. In general, the same case in Oakland or Wayne County may be worth more than if the case occurred in Oscoda or Roscommon.

The facts behind the incident and the parties involved matter way more than jurisdiction.

All of the above help explain what a slip and fall case in Michigan is worth. But each case is different. Call the Michigan slip and fall lawyers at the Lee Steinberg Law Firm at 1-800-LEE-FREE (1-800-533-3733) so we may answer your questions and assist you in putting your life back together.

We specialize in Michigan premises cases, having handled them all over the state for over 40 years. And we never charge a penny until we win your case. Call us toll free today.