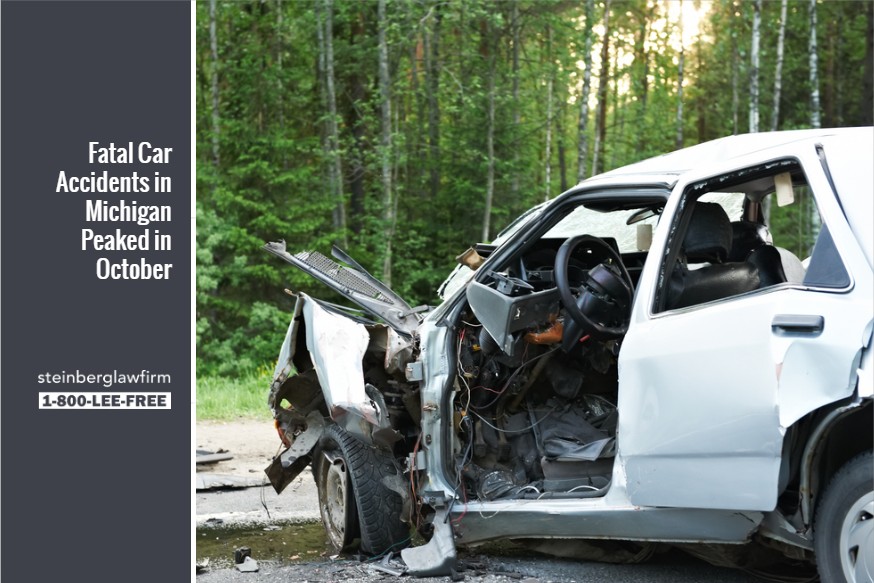 Key Points in the Article:

The month of October held up to its bad reputation for an increase in fatal car accidents across Michigan. Common causes for the rise in these crashes this time of year are due to a driver’s careless, reckless, or malicious behavior like speeding or driving while distracted, as well as an increase in traffic during events like Halloween and fall festivals. A hike in deer-vehicle collisions also contributes to many crash fatalities in which a driver loses control of their vehicle.

Our attorneys at The Lee Steinberg Law Firm took some time to review Michigan crash data as well as the police reports related to some of October’s fatal crashes. We are working to provide tips and facts related to the crash investigations in hopes to help keep other drivers safe from being injured or killed in similar accidents.

October 24: In Menominee County’s Holmes Township, an afternoon crash left one man dead and another seriously injured, according to the Menominee County Sheriff’s Office. The accident occurred at the intersection of County Road 356 and County Road 577 and involved three vehicles, all traveling with passengers as well. Some of the crash victims were entrapped in their vehicles, and one passenger who was ejected died as a result of the injuries caused by the collision.

The vehicles were driven by a:

Deputies said the young driver from Stephenson caused the crash by disregarding the stop sign at the intersection. He was soon after arrested for operating a vehicle under the influence of drugs causing death and given a $50,000 PR bond. He remains in the custody of a medical facility where he is suffering from life-threatening injuries.

Fact: Michigan is a zero-tolerance state, meaning drivers can be prosecuted for any amount of cocaine or Schedule 1 drug in their system except for those individuals who hold a medical marijuana card.

October 25: In the northern community of Mount Pleasant, two people died when their passenger car collided with a Chippewa Hills school bus. The Isabella County Sheriff’s Office reports that the car entered the oncoming lane of traffic along a road around 9 p.m. in Broomfield Township when it smashed into the school bus. Two students, traveling with their school’s football team, were also injured.

Police reports show that the car was damaged at the time of the crash and immediately caught fire. Both its driver and its only other occupant were killed. The two students riding the bus suffered minor injuries and were transported by ambulance to an area hospital.

Tip: The National Highway Traffic Safety Administration (NHTSA) says that the school bus is the safest vehicle on the road. But a lack of bus safety knowledge and distractions are likely causes for school bus-related incidents according to Michigan State Police, requiring driver reminders to keep an eye out for kids, slow down, stay alert, and always stop when approaching a school bus.

October 26: In Bushnell Township, a 24-year-old Sheridan man died in an early morning car accident on Condensery Road near Townhall Road. Michigan State Police Troopers from the Lakeview Post responded to the scene and concluded that a 2002 Chrysler sedan was traveling east on Condensery Road, when it ran off the road and overturned. Unfortunately, the young man who was driving was pronounced deceased at the scene and another occupant, also a 24-year-old Sheridan man, was transported to a local hospital in Grand Rapids and is being treated for severe injuries.

Fact: Distracted driving is the most common cause of road accidents in the United States, resulting in more crashes every year than speeding, drunk driving, and other major accident causes.

October 29: On eastbound I-96, the Livingston County Sheriff confirmed a fatal accident involving a vehicle that ran off the road around 7 a.m. While it remains unknown how the accident occurred, the vehicle, a Subaru Ascent, struck a tree and caught on fire after it left the highway. Both a driver and a front-seat passenger were found dead once responders extinguished the flames. The car was registered to an elderly woman from East Lansing.

Tip: Car fires caused by collisions don’t happen frequently, but when they do, it’s a potentially life-threatening emergency and those who want to assist before responders arrive, may face a tough decision to help or not. According to the U.S. Fire Administration, firefighters agree that pulling a person from a flaming car, even if it aggravates any injuries, would undoubtedly be “leaving the person better off than you found him.”

We never like to report on traffic fatalities and remain saddened for the family members and friends who are grieving from these losses. While accidents happen, sometimes they could have been caused by negligent or reckless drivers who should be held accountable. If any of our blog readers have information about a crash they witness, please call the local Michigan State Police or Crime Stoppers at 800-427-5857 and share what you know. Your account of the accident may help a family find the answers they need to pursue a legal claim and help keep Michigan roads safe from dangerous drivers.

If you or someone you love was tragically killed in a motor vehicle accident in Michigan and you are seeking answers, call The Lee Steinberg Law Firm today and trust that we have the resources and experience to help. In addition, you or your family may be entitled to compensation and survivors’ loss benefits to help with medical bills, lost wages, and pain and suffering.

Call The Lee Steinberg Law Firm today for a FREE consultation with one of our experienced Michigan auto accident attorneys: 1-800-LEE-FREE.