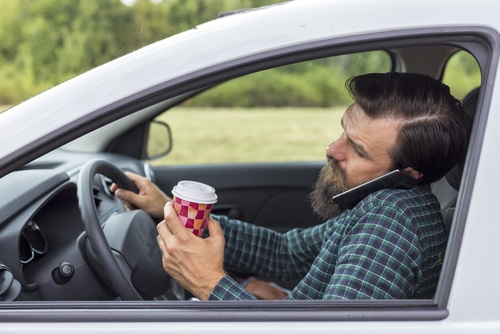 A Michigan State University associate coach was recently taken into custody by Monroe County Sheriff’s deputies after being involved in a fatal four-vehicle crash on U.S. 23. As reported by several local news outlets, 37-year-old Todd Moyer, was driving southbound on U.S. 23 in Summerfield Township when the chain-reaction crash occurred, killing two people, according to a news release from the Sheriff’s Office. Police also say Moyer was at the wheel doing other things when he struck the rear of a Hyundai Elantra driven by a woman traveling with her 5-year-old daughter who was a passenger in the backseat. Both the woman and child were pronounced dead at the scene.

The tragic first accident triggered by Moyer set off two secondary crashes. After being rear-ended, the woman’s Hyundai was forced into the rear of a Toyota Solara. Moyer’s vehicle then struck the back of a Cadillac CTS driven by a 68-year-old man who was traveling with a 67-year-old woman sitting in the front passenger seat, according to a police report. Luckily, all survivors of the crashes were wearing safety belts, traveling at appropriate speeds and did not require immediate medical help.

Deputies have reported that alcohol was not a factor and no charges have been formally made, pending the results of the Sheriff’s Office crash investigation. Investigators do believe Moyer was distracted at the time of the accident. Driver inattention is the leading factor in most crashes and near-crashes, according to the National Highway Traffic Safety Administration. In 2015, 3,477 people were killed in crashes involving a distracted driver. An additional, 391,000 people were injured in motor vehicle crashes involving a distracted driver.

Our thoughts and prayers go out to the victims’ family during this difficult and tragic time. We also think it is an appropriate time to remind our readers of the dangers involved with distracted driving.

What Is Distracted Driving?

Each day in the United States, approximately nine people are killed and more than 1,000 injured in crashes that are reported to involve a distracted driver.

There are three main types of distracted driving:

Michigan State Police offer these suggestions on how to avoid becoming a distracted driver by focusing on the task at hand.

Texting is the No. 1 Distracted Driver Concern

Texting while driving is especially dangerous because it combines all three types of distraction. Sending or reading a text message takes your eyes off the road for about 5 seconds, long enough to cover a football field while driving at 55 mph.

In 2016, AAA conducted a distracted driving survey in Michigan. It showed that nearly 95 percent of the Michigan residents polled said texting while driving was their number one concern when asked about driving distractions. This response was alarming since more than a third of drivers admit to reading text messages while operating a passenger motor vehicle. While it may only take a driver’s eyes off the roadway for a couple of seconds, sending or reading a text at 55 mph, is comparable to driving down the length of a football field blindfolded. The texting while driving concern was followed closely with operating a motor vehicle when tired (94%), grooming (87%) and talking on a hand-held cell phone (63%). These statistics are similar in most states across the nation and show cause for the text messaging ban currently in place for all drivers in 46 states, Michigan included.

Under Michigan’s anti-texting law (sec. 257.602.b) a driver shall not “read, manually type, or send a text message on a wireless 2-way communication device that is located in the person’s hand or in the person’s lap, including a wireless telephone used in cellular telephone service or personal communication service, while operating a motor vehicle that is moving on a highway or street in this state.”

Let the Law Offices of Lee Steinberg Handle Your Claim

If you or a family member is a victim of an accident caused by a distracted driver, your first responsibility is to focus on recovery. Before speaking with the insurance company seek out the qualified advice of a car accident attorney. The Law Offices of Lee Steinberg, P.C., has been representing accident victims for over 40 years and we can help you through this difficult time. Call us today for a free consultation about your potential case at 1-800-LEE-FREE.