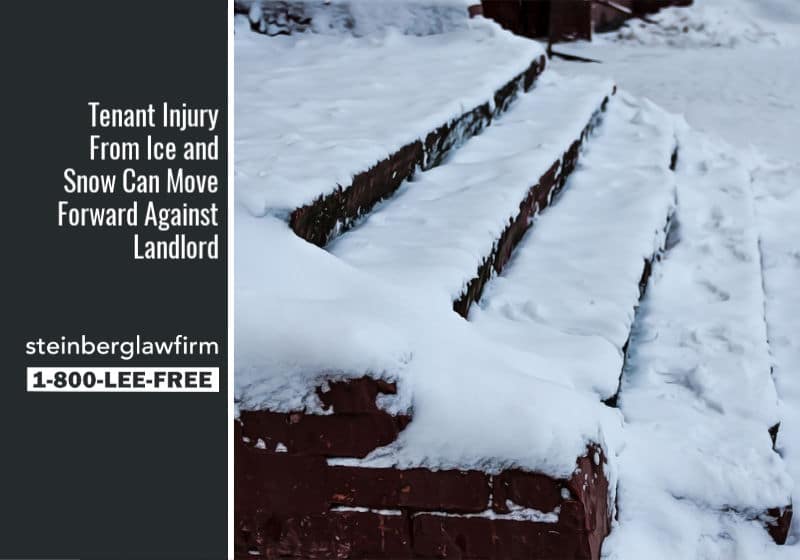 When the cold weather hits, it inevitably brings snow and ice. In Michigan, landlords have a duty to their tenants to make sure their properties are in reasonable repair, including ensuring a reasonably safe environment from winter conditions. These protections also extend to common areas like sidewalks, walkways and stairways, where landlords must make sure these areas are suitable and safe from ice and snowy weather.

A recent case for a tenant injured at her apartment complex in Macomb County illustrates this.

In Branch v. D&S Property Management, LLC, docket no. 345882 (unpublished, 12/26/2019), the plaintiff had two separate slip and falls at an apartment complex on the same day. At around 9:00 a.m., upon returning to the rear of the complex, she slipped and fell on the sidewalk near the entryway to the building. This entryway was covered in snow. After falling, she was able to enter the apartment and alert the management office of her fall and the accumulated snow on the sidewalks.

About 12 hours later, the plaintiff left her apartment again. This time as she was descending the stairs to the rear entryway, where she slipped and fell. She was unable to grab the handrail next to the stairs for support because it was covered in ice. The ice had accumulated as a result of a defective gutter above the rear entryway that leaked water.

Because of the falls the plaintiff had some serious injuries, undergoing multiple back surgeries. She filed a lawsuit against the apartment complex. She made two main allegations. The first was a violation of MCL 554.139(1)(a), that the sidewalks and stairwells were not fit for their intended use. The second was a premises claim that the apartment complex was negligent for creating an unreasonable risk of harm to the plaintiff. The trial judge dismissed both of the claims and the plaintiff appealed.

The Michigan Court of Appeals reversed part of the trial judge’s ruling. First, the Court held that because there was ice and snow all over the sidewalk and stairway where the plaintiff fell, a jury should decide whether the landlord violated MCL 554.139. So the Court reinstated that part of the plaintiff’s case. However, the Court still dismissed the plaintiff’s premises negligence claim.

Details of the Landlord-Tenant Injury Statute & The Branch Case

Under MCL 554.139(1)(a), or the Michigan landlord-tenant injury statute, a landlord promises that the premises and all common areas are “fit for their intended use” by the parties (tenants). In the Branch case, the court determined that both the sidewalk where plaintiff first fell and the stairwell where she fell later that night were both “common areas.” This makes sense given other residents could also use those areas of the complex.

The sidewalk leading from the plaintiff’s apartment building to the parking lot that day was covered in snow. In fact, there was so much snow it was difficult to determine where the sidewalk was located while she attempted to walk to her apartment. In addition, a layer of ice rested under the snow. The defendant had done nothing in the prior 24 hours to remove the snow and ice from the sidewalk area. As such, the Court found the plaintiff had showed enough to go forward with her claim.

As for the stairwell in the rear of the apartment building, there was evidence that the stairs and the handrail leading to the rear entrance way were covered in ice. In addition, the light above the rear entrance way was broken and the gutter above the entrance way was leaking water, causing ice to form on the handrail and stairs. There was also evidence the tenant alerted the maintenance people at the complex about these conditions prior to her fall, but the complex failed to address the situation. Given this, the Court determined that reasonable minds could differ whether these conditions rendered the stairway unfit for its intended use. Again, the plaintiff could proceed with this part of her case.

The Court then addressed the plaintiff’s premises liability claim. Under Michigan law, a landlord “owes a duty to an invitee to exercise reasonable care to protect the invitee from an unreasonable risk of harm caused by a dangerous condition on the land.” Lugo v. Ameritech, 464 Mich 512, 516 (2001). However, absent special aspects, this duty does not extend to open and obvious conditions, such as ice and snow, and the landowner has no duty to warn or remove this hazard. Buhalis v. Trinity Continuing Care Services, 296 Mich. App 685 (2012).

However, if a condition is open and obvious, the landlord may still be liable if the hazard was effectively unavoidable. The standard for “effective unavoidable’ is that a person, for all practical purposes, must be required or compelled to confront a dangerous hazard. Hoffner v. Lanctoe, 492 Mich 450, 463 (2012).

The Court reasoned it was not effectively unavoidable because at the time of her slip and falls, the tenant had the option to enter and exit her apartment building through the front door. So she was not compelled to confront the hazardous condition. And as a result, she could not bring a common law claim of landlord negligence.

Puzzling Decision By The Court

The decision by the Court to not find the area effectively unavoidable is puzzling and frustrating. In fact, a judge dissented to this part of the decision. After all, why should the landlord’s decision to not remove ice and snow dictate when and where a tenant leave her own building? As the dissent noted, why must tenants “elect to be prisoners in their homes rather than risk falling.” This is a very fair point and hopefully, something the Michigan Supreme Court will take a look at in the very near future.

If you or anyone you know has been injured due to a landlord’s negligence, such as a broken banister, stairs or deck, or a failure to rid the property of snow and ice, give our office a call. Our dedicated team of Michigan tenant injury lawyers can help you pick up the pieces and obtain money compensation.

Call the Lee Steinberg Law Firm, P.C. toll free at 1-800-LEE-FREE (1-800-533-3733) for a free telephone consultation. As always, there is no fee until we win your case. Our dedicated team of Michigan tenant injury lawyers are here to answer your questions.