What if I am in a Crash with an Uninsured Vehicle? - Call Lee Free
Skip to content 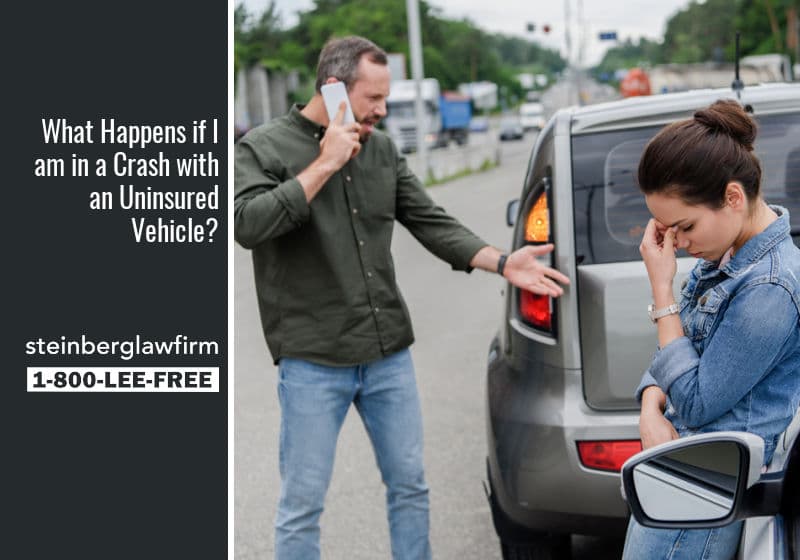 There are over 3 million commercial and private vehicles in Michigan. Although liability insurance is mandatory in Michigan, unfortunately due to its high cost many of these vehicles are not insured. In fact, in some areas of the state it is estimated more than 30% of private vehicles fail to have any insurance. If you are injured in a crash with an uninsured vehicle, without proper protection you can end up with nothing.

Michigan uninsured motorist coverage, commonly known as UM coverage, provides compensation to individuals injured in a car accident when an uninsured vehicle causes the crash. Injured individuals can obtain pain and suffering compensation, reimbursement for past medical bills and future medical expenses from an auto insurance carrier, even if the person who caused the accident did not have insurance on the car.

UM coverage can be purchased at the time the policy is taken out or added as a coverage at any time during the term of the insurance policy. It is a great way to protect yourself and your family, especially during an era where literally hundreds of thousands of vehicles operate on Michigan roadways without insurance every single day.

What Does Uninsured Motorist Cover?

Uninsured motorist coverage covers the pain and suffering compensation a person injured in a Michigan car accident would have received from the at-fault driver or at-fault vehicle if that driver was insured. To recover pain and suffering, the injured person must have a “threshold” injury under Michigan law. There are three separate types of threshold injuries. They include (1) death, (2) permanent serious disfigurement, and (3) serious impairment of body function. Most cases involve this last category, serious impairment of body function.

Besides pain and suffering, uninsured motorist benefits also cover medical bills and lost wages not covered under PIP coverage. For example, if the injured person’s PIP coverage is exhausted or used up following a crash, the injured person can turn to his or her uninsured motorist coverage for the payment of medical expenses related to the car accident.

How To File an Uninsured Motorist Claim?

To formally make a claim for uninsured motorist benefits, the injured person must usually do so in writing and clearly state he or she was injured by an uninsured vehicle.

In addition, most insurance policies have a “physical contact” requirement. This means as a condition to making an uninsured motorist coverage claim, there must be physical contract between the uninsured vehicle and the vehicle containing the injured person.

What is the Time Limit to File an Uninsured Motorist Claim?

However, almost all insurance companies – such as State Farm, Allstate and Liberty Mutual –  follow the same statute of limitations permitted under Michigan law and gives a claimant 3 years from the date of the accident to file a lawsuit in court.  If more than 3 years has passed, and the injured person has failed to file a lawsuit in court, that injured person forfeits his or her right to obtain compensation for their injuries under the policy.

Who is Covered in an Uninsured Motorist Claim?

Uninsured motorist claims cover more than just the insurance policyholder. Under most policies, all relatives residing with the policyholder will be protected under the policy. This means family members – like a spouse or child – can also utilize uninsured motorist coverage in effect at the time of the crash. In addition, many insurance policies will also cover any occupant of a motor vehicle covered under the policy.

For example, if a Ford Explorer has uninsured motorist coverage through AAA Insurance, that policy may cover not only the driver and the family members of the owner of the Ford Explorer, but also any individuals occupying the vehicle when the crash occurred. This is true even if they lived in another household and had nothing to do with the AAA insurance policy.

What is the Minimum Amount of Uninsured Motorist Coverage?

Under Michigan law, the minimum amount of uninsured motorist coverage that is sold is $50,000 per person and $100,000 per accident. This is an increase from the old law, where the minimum amount of coverage was only $20,000. Uninsured motorist coverage is not mandatory in Michigan. This means you must request it from your insurance agent. The good news is the coverage is inexpensive and one of the most economical insurance coverages a person can buy when purchasing car insurance in Michigan.

Yes. Just because an accident occurs outside of Michigan doesn’t mean you cannot utilize uninsured motorist coverage. In fact, many policies will cover you if the accident happens in Canada or Mexico. However, it important to read the policy and understand your duties and obligations following a crash, whether it happens in Detroit, Grand Rapids or Dallas, Texas. Often, the laws of the state where the accident occurred will apply.

The uninsured motorist lawyers at the Lee Steinberg Law Firm, P.C. have been helping car accident injury victims for almost 50 years. We are experts in insurance and car accident law. We can help put the pieces back together, even if an uninsured vehicle causes a crash.

Give us a call at 1-800-LEE-FREE (1-800-533-3733) so we our dedicated team of Michigan car accident attorneys can answer your questions. We don’t charge a penny until we win your case and the telephone call is always free.