What Happens if I Miss an IME or an EUO in Michigan?
Skip to content 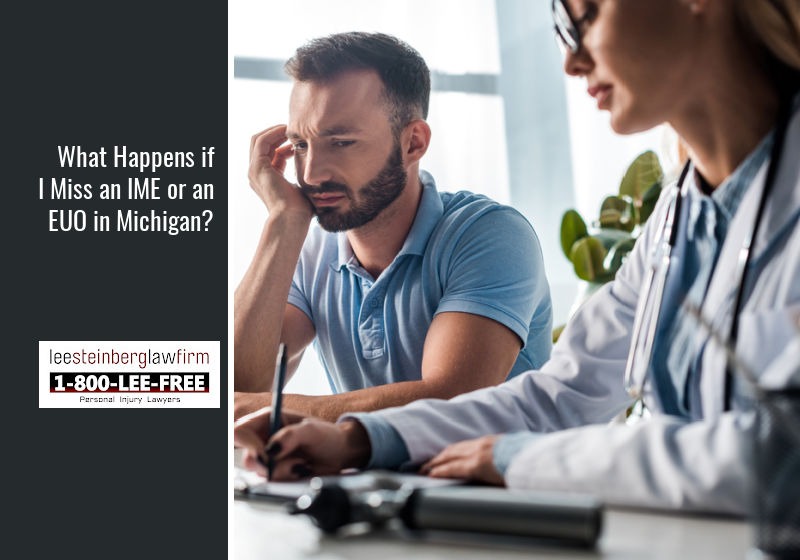 Car crashes and wrecks in Michigan are difficult to deal with. First, you have the damage of your car to contend with, which is expensive and stressful. Then you have the pain that can follow the accident, along with time missed from work and medical bills which only adds to the stress.

In these situations, under Michigan law you turn to your own auto insurance company to provide protection and the benefits you paid for. These benefits are called no-fault PIP benefits. They include payment for medical bills, lost wages, out-of-pocket expenses and other expenses.

Car Insurance Companies Have Requirements to Get Certain Benefits

Many of these rules are strict. They include attending an “independent medical examination” or IME. They also include participating an Examination Under Oath or EUO. Failing to abide by these requirements can have severe consequences. This can include an injured person not being able to get the benefits they paid for, as recently illustrated in a Michigan Court of Appeals Case.

In Gueye v. State Farm, ___ Mich App ____ (docket no. 358992, published 09/22/2022) an Oakland County man was injured in a car crash. After the crash, he filed a no-fault personal injury protection (PIP) claim against his auto insurance carrier State Farm. He also filed a negligence claim against the at-fault driver as well as an underinsured motorist benefits (UIM) against State Farm.

Under the Michigan no-fault law, your own auto insurance carrier must pay for medical bills related to the crash that health insurance is not responsible for, up to the PIP coverage limit. On the other hand, the at-fault driver is responsible for paying compensation for pain and suffering.

But what the at-fault driver who was negligent in causing the crash has little insurance? In other words, what if the at-fault driver is underinsured? Then in that situation, a person can turn to their own insurance carrier for compensation. This is known as an Under Insured Motorist (UIM) benefits claim. In this case, Mr. Gueye, filed a UIM claim against his insurer, State Farm.

UM/UIM Benefits are Contractual and Not Mandatory Under Michigan Law

However, while PIP benefits are mandatory because they are provided by statute under the Michigan No-Fault Law, MCL 500.3101 et. seq., UIM benefits are contractual in nature. This means a person’s entitlement to UIM benefits depends upon following the requirements of the car insurance policy. And if a person fails to abide by these contractual requirements, they may forever lose their right to UIM benefits. This is true even if they paid this coverage when they purchased the insurance policy.

This is exactly what happened in the Gueye case. Following the accident, State Farm asked Mr. Gueye to appear for an “independent medical examination” (IME). The plaintiff failed to attend. State Farm also requested he attend and “examination under oath” (EUO). Before the EUO occurred, State Farm denied the plaintiff’s claim for no-fault benefits.

What is an IME?

An independent medical examination, or IME, is when an insurance carrier hires a doctor to perform a medical record review and in-person examination on a claimant who has filed for benefits, such as no-fault PIP benefits. The IME doctor is paid by the insurance carrier to write a report. The opinions of the doctor in the report can then be used by the insurance company to make certain decisions on the claim, such as denying the payment for all future benefits.

Most IMEs are anything but “independent” and normally don’t involve much medicine or much of an examination. Instead, they are a tool used by the insurance industry to “cut off” claims by terminating the payment of future benefits.

What is an Examination Under Oath EUO?

In Gueye v. State Farm case, State Farm followed up with Mr. Gueye’s counsel about scheduling the EUO. However, his counsel explained that a lawsuit would be filed instead, making the EUO duplicative given that a deposition would occur during the lawsuit.

After Mr. Gueye filed a lawsuit, State Farm filed a motion to dismiss both his no-fault PIP claim and his UIM claim for failing to attend either the IME or EUO, prerequisites to recovery under the State Farm policy. The Oakland County judge granted State Farm’s motion, completely dismissing both Mr. Geuye’s PIP claim and UIM claim. Mr. Gueye then appealed.

In a published decision, the Michigan Court of Appeals affirmed in part and reversed in part the trial court’s ruling.

The Court of Appeals affirmed the dismissal of Mr. Gueye’s UIM benefit claim. In reaching this decision, the Court found that unlike no-fault PIP benefits which are required by law, UM (uninsured motorist benefits) and UIM benefits are not required by law. A person does not have to purchase these coverages. Therefore, the terms of the insurance control any potential entitlement to UM and UIM benefits.

In this case, the State Farm policy clearly said that a person making a claim for UM/UIM benefits “must at [State Farm’s] option, submit to an examination under oath … as reasonably often as [State Farm] require[s].”

The State Farm policy also requires that claimants like Mr. Gueye submit to IMEs paid by State Farm. The insurance contact goes on to state that legal action may not be brought against State Farm if the claimant has not complied with these provisions.

Using the insurance policy as a guide, the Court of Appeals held the by failing to attend both the IME and EUO, Mr. Gueye failed to abide by the required conditions precedent before filing the lawsuit. As a result, the trial court did not error in dismissing his claim against State Farm for UM/UIM benefits.

PIP Benefits are Mandatory By Law and Therefore Treated Differently

However, the Court of Appeals ruled in favor of Mr. Gueye on his claim for no-fault PIP benefits and reversed the trial court’s decision to dismiss his PIP claim. In doing so, the Court held that unlike UM/UIM benefits, PIP benefits are mandatory by the no-fault act. MCL 500.3105.

Because of this, a trial court may authorize sanctions against a claimant who refuses to submit to an IME or EUO. And these sanctions can include the outright dismissal of a plaintiff’s no-fault PIP case.

However, the Court went onto to rule that “our legal system is also committed to a countervailing policy favoring disposition of litigation on the merits.” In other words, when less drastic sanctions are available, the trial judge should impose those rather than the complete dismissal of a person’s PIP claim.

Under this frame of analysis, the Court found that in prior cases of a plaintiff missing an IME, Michigan courts have previously held that a less severe sanction is warranted. That before dismissing a no-fault claim, a trial court must carefully evaluate all available options and conclude the sanction of dismissal is just and proper.

In this case, the trial court failed to do this. MCL 500.3153 provides a list of five options a trial judge may choose to sanction a plaintiff for failure to attend IMEs, with only one option being the dismissal of the case.  The Court sent the case back to the trial court to analyze various factors to determine whether dismissal was an appropriate sanction.

The result of Gueye case is a mixed bag for plaintiffs. On of the one hand, Mr. Gueye’s claim for UIM benefits from his insurance company, State Farm, was totally dismissed for failing to appear to only one IME and because his attorney filed a lawsuit before the EUO occurred. Many attorney file lawsuits before an EUO for strategy purposes and IMEs are missed all the time.

Worse yet, all of this occurred before the lawsuit was even filed. It’s not like Mr. Gueye violated a trial judge’s order to appear for an IME or some other litigation order.

The Court of Appeals decision is drastic and may have serious repercussions. Now all car insurance carriers and their lawyers can use the Gueye case to get otherwise valid UM/UIM claims dismissed because the injured person failed to show up to even one IME. This previously was not the standard and lesser sanctions would apply.

On the other hand, the Gueye case guarantees that even if a claimant misses an IME or EUO, no-fault PIP claims must go forward. The car insurance company can’t weasel its way out of paying mandatory no-fault benefits such as medical bills and lost wages just because a person couldn’t get a ride to an IME appointment 45 minutes from their home.

A Great Car Accident Lawyer Is Important to Win Your Case

The Gueye case demonstrates the importance of having great lawyers and having a great Michigan car accident law firm on your side. A simple missed IME or EUO can result in horrible penalties. That is why it’s important to have auto accident lawyers working for you to make sure you are aware of all independent medical examinations and EUOs. Communication during a case is key, and a law firm that responds to your telephone calls, emails and messages is super important.

Car Accident Lawyers Who Know How to Beat the Insurance Company

The Michigan car accident lawyers at the Lee Steinberg Law Firm, P.C. know how to beat the insurance companies at their own game and win your case. Our record of recovering hundreds of millions of dollars for thousands of clients throughout the Michigan speaks for itself.

Call us toll free at 1-800-LEE-FREE (1-800-533-3733) if you have any questions about your no-fault case or car accident case. If the insurance company has asked you to attend an IME or to submit to an examination under oath (EUO), call us. We can explain what it means and how to best handle the situation.

All consultations are free, and we never charge a fee until we win your case by getting you money compensation. We look forward to your speaking with you and answering your questions.