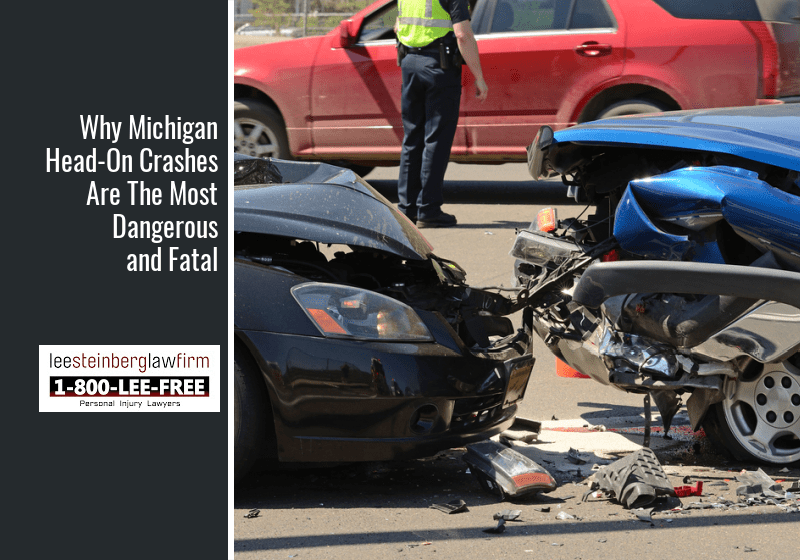 Michigan Head-On Car Crashes Are Rare, But Also the Most Dangerous

According to the National Highway Traffic Safety Administration, head-on collisions only account for about 2% of all accidents in the U.S. Head-on collisions happen most often in rural areas, where vehicles are traveling at high speeds. In Michigan, the U.S. Census Bureau classifies Antrim, Arenac, Baraga, Benzie, Keweenaw, Lake, Missaukee, Montmorency, Ogemaw, Ontonagon, Osceola, Oscoda as rural counties.

While rear-end and angle crashes remain the most common motor vehicle accident reported, head-on collisions are more dangerous and deadly. Using the latest report from the Michigan Department of State Police Traffic Crash Reporting System, in 2020, there were 3,109 head-on crashes and 5,566 head-on crashes that involved a left turn. Together, all types of head-on crashes resulted in 166 fatalities and 6,101 injuries across the state.

Due to trajectory, force of crash, and often high-speeds, head-on crashes cause the most severe personal injuries for those who survive, resulting in an enormous amount of recovery, medical bills, lost wages, and pain and suffering. Whether mild or severe your car accident injuries are, connecting with a car and truck accident lawyer at Lee Steinberg Law Firm soon after your crash – is one of the best moves you can make.

The best way to protect yourself from a head-on collision in Michigan is to understand the risky driver choices that can cause them. The majority of head-on crashes in Michigan have been attributed to one driver traveling the wrong way, either by crossing the centerline of the roadway or simply by driving in the opposite direction that is marked. Most wrong-way accidents stem from a motorist not exercising reasonable care while driving, and the more common preventable causes behind these crashes can include:

Getting involved in a head-on collision on a Michigan roadway can be life-altering. We have handled numerous head-on crashes at our law firm, and they often involve the most serious injuries, including death.

What Should I Do If I Am Involved in a Head-On Collision in Michigan?

The rush of adrenaline most crash survivors describe can initially mask any symptoms of pain. If you haven’t been disabled and can call for help, call 911 immediately or yell out to bystanders to do so. Even if you appear injury-free, medical personnel must evaluate everyone involved.

While waiting for first responders to arrive, refrain from posting about the crash on social media platforms. What you post could be twisted and used against you by insurance companies. Instead, use your phone as a tool to gather everyone’s thoughts about how the accident occurred and the injuries or pain they have sustained. Collect crash evidence such as photos and videos of the vehicles and scene, injuries, and document what you remember in the moments leading up to, during, and after the crash.

You can also exchange information with the other motorists and any witnesses involved, including:

If you have been seriously injured and transported to a local emergency room, know that you can follow up with the police as soon as possible to share your side of the story. You can even make a telephone call from your hospital bed, so your experience is included in the report. In addition, this information can be helpful when the car insurance companies evaluate the claim or legal action is established.

Watch Out for These Common Injuries After a Head-On Crash

When it comes to injuries sustained in a head-on collision, the result is frequently much more severe and permanent and may include the following:

Michigan is a no-fault state, so even if you are at-fault for causing the head-on crash, you can still make a claim for no-fault benefits. This can include the payment of all medical expenses that insurance will not cover, lost wages, prescription reimbursement, replacement services, and other vital benefits to support your recovery.

Finding a Michigan head-on collision lawyer to help you navigate through everything is vital. These cases demand special attention because of the severity of the injuries, the emotional trauma, and the insurance company defenses that inevitably come up. Call the trusted team at Lee Steinberg Law Firm at 1-800-LEE-FREE (1-800-533-3733) for a free consultation. We can answer your questions and let you know if you have a case. And we never charge a cent until we win your case.