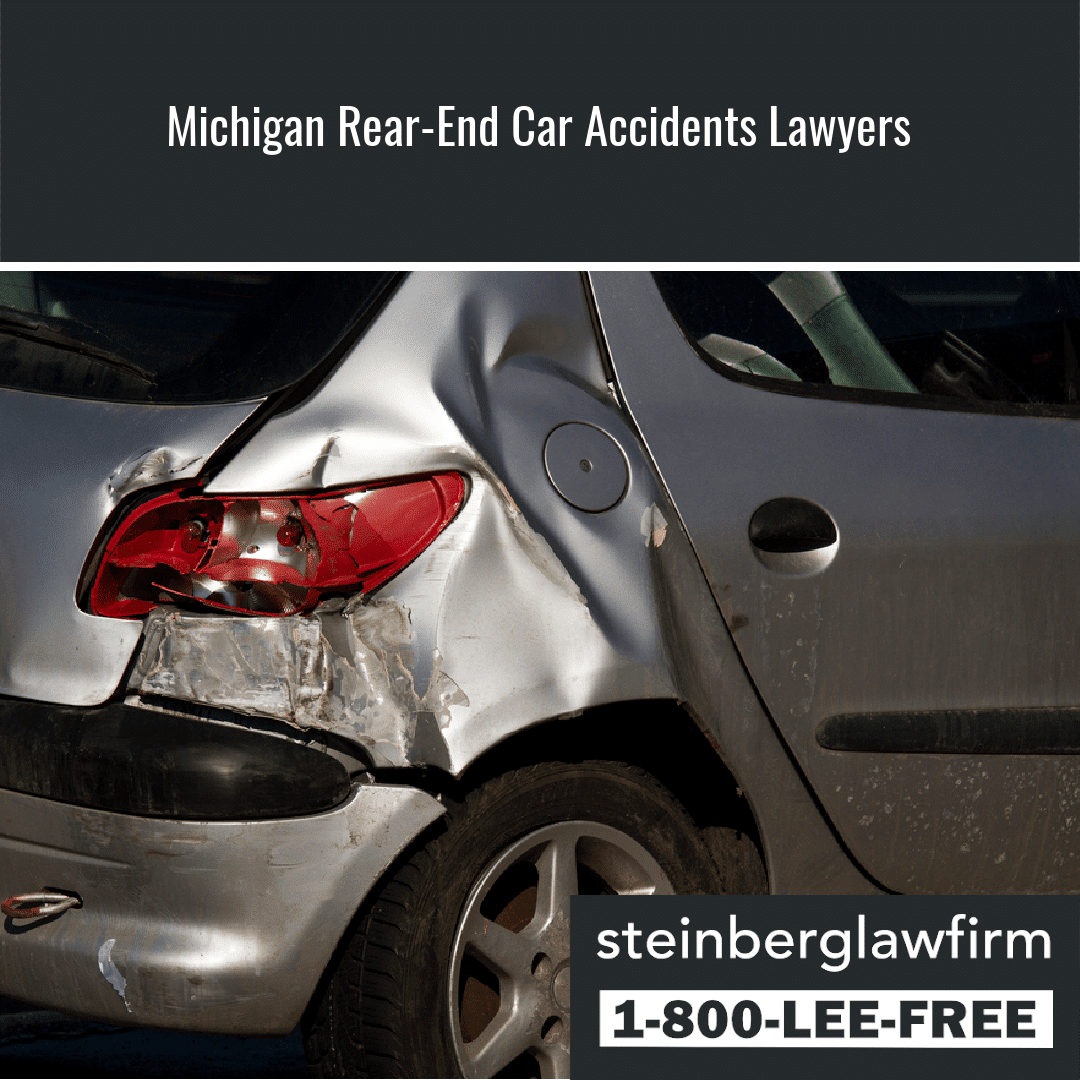 Rear-end car accidents have increased over the years on Michigan roadways. They can occur out of nowhere and often result in some of the worst injuries because victims are unaware of what is about to happen and cannot act to protect themselves. The Michigan rear-end car accident lawyers at the Lee Steinberg Law Firm, P.C. handle these cases daily. We have worked with our clients in helping them put the pieces back together so they can move on with their lives.

The following are some of the reasons why rear-end crashes in Detroit, Flint, Grand Rapids and other locales have increased. This article also explains how to present a Michigan rear-end crash claim to an insurance company, what benefits a person is entitled to, and what things an injury victim must be aware of following the accident.

One of the biggest causes of rear-end car accidents in Michigan is the use of cell phones by motorists while driving. People are now spending an exorbitant amount of time on their smart phones. Drivers are texting, checking their email and using social networking sites like Facebook, Instagram and Twitter while driving a high-powered vehicle down a busy street at a high rate of speed.

This is a recipe for disaster. Although most negligent drivers will not admit they were on their cell phone when an accident occurred, and thus law enforcement records don’t accurately reflect the large increase in texting and driving accidents and cell phone related crashes over the years, there is little doubt this the main cause. And distracted driving in Michigan is dangerous driving.

This compares to 2009, when approximately 70,782 rear-end crashes occurred. Clearly, the number of rear-end accidents have increased dramatically over the last decade.

Another reason for rear-end crashes is because drivers fail to pay attention while behind the wheel. Whether a person is playing with the radio, looking away from the road or simply daydreaming, accidents occur when people take their eyes of the road.

Road conditions can change in an instant. It is vital to always pay attention to the vehicles on the roadway so you can make necessary adjustments.

There are several no-fault benefits, or personal injury protection (PIP) benefits available to victims of Michigan rear-end crashes for both drivers and passengers. These benefits include:

The auto insurance company pays for these benefits. The carrier responsible for paying is set out by Michigan law. This is called the “order of priority”. A driver or passenger involved in a Michigan car accident always goes to their own auto carrier first. So, if a driver is rear-ended in Sterling Heights or Saginaw, and the driver has State Farm Insurance, then State Farm must pay the claim.

If a person involved does not have auto insurance, then the auto insurance of a resident relative must pay the claim. For example, if a passenger is involved in a car crash in Traverse City and does not have car insurance of their own, but lives with their mother who carries Allstate Insurance, then Allstate must pay the claim. This is the rule even though the car covered by the Allstate policy was not involved in the crash.

If a person does not have any auto insurance of their own, and no resident relative has car insurance either, the injured individual can still make a claim though the Michigan Assigned Claims Plan (MACP). The Plan will then assign an auto insurance company to pay benefits.

There is one huge caveat, however.  If a person is injured in their own vehicle, and that car is uninsured when the rear-end crash occurs, that person may not make a PIP claim.

A knowledgeable Michigan rear-end car accident lawyer can help a person injured in a rear-end crash obtain compensation for their injuries. This can include compensation for pain and suffering, emotional distress, loss of consortium and other non-economic damages that arise from the crash.

To obtain pain and suffering compensation, a person injured in Michigan must prove (1) negligence, (2) causation, (3) injuries, (4) a threshold injury.

Negligence is a fancy legal term for fault. To be eligible for compensation, an injured person must first prove the other driver was at least 50% at-fault for causing the crash. This is relatively simple in rear-end accidents due to the nature of the accident. Under the law, a person who has rear-ended another vehicle is presumed to be negligent.

Next, the injured person must prove the car accident caused the injuries he or she sustained. This is accomplished through medical records and the testimony of treating doctors or experts. Just because a person was injured before the accident does not mean they aren’t entitled to compensation. But they must prove the car crash aggravated a pre-existing injury. And the law requires this be done through medical proof by way of medical treatment.

Next, the injured person must be injured to obtain compensation. This is obvious, but just because you are involved in a rear-end crash does not mean you can get money. Instead, a person must show they were injured by the crash.

Last, a person claiming pain and suffering compensation must also show he or she sustained a “threshold injury.” A threshold injury basically means a person has to demonstrate they were injured enough in order to be compensated for their injuries.

To show you have sustained a “serious impairment of body function”, an injured person must show the car accident has affected their general ability to lead a normal life.

This is a case specific situation, and a Michigan car accident injury lawyer can explain the “ins and outs” of what it means to show a car accident has changed a person’s life. Typically, the injured person must show the low back pain and other injuries have impacted their ability to do certain recreational activities and hobbies they used to do before the crash occurred. Activities such as working at a job, doing household chores and other activities of daily living are all important in showing the impact.

Types of Injuries from Rear-End Collisions

The type of injuries people sustain from a rear-end accident can vary. Some of the more typical injuries include:

Rear-end collisions in Michigan are more complicated than they seem. A dedicated Michigan rear-end car accident lawyer can help you obtain the benefits you are entitled to under the law.