What Are Michigan's 20 Most Dangerous Intersections? | Call Lee Free
Skip to content 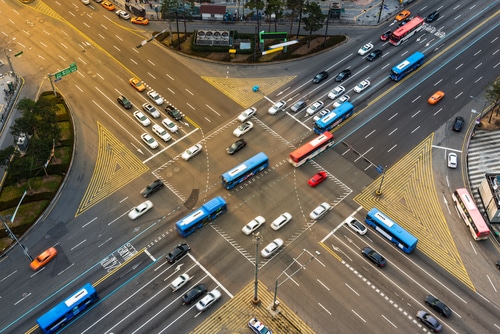 Community members and residents near Whittemore Street and Sanford Street in Pontiac, Michigan recently witnessed a terrifying afternoon crash at what most say is one of the city’s most dangerous intersections. Bystanders report seeing a car soaring into a home after it was T-boned by a speeding driver and sent flying. Thankfully no one was seriously hurt in the accident, but many are left shaken and fearful it could happen again. Residents say the intersection has been problematic for years with accidents being witnessed and reported weekly. Many community members have told local news outlets about their requests for a four-way stop or traffic signal to slow down the onslaught of speeding drivers.

The personal injury attorneys at the Law Offices of Lee Steinberg are constantly reviewing crash data from the Michigan State Police Traffic Crash Reporting Unit in hopes to identify Michigan intersections and traffic spots where injuries are likely to occur and warn others. While the fatality number may not be high in Pontiac at Whittemore and Sanford, reports still show trends in accident occurrence at the busy intersection. In 2014, the intersection was home to an awful ambulance rollover accident while emergency responders were en route to a call. The accident resulted in sending three people to the hospital with traumatic injuries. The ambulance was hit at the intersection by another vehicle traveling at a high rate of speed, operated by a distracted driver.

A poor layout of roads, changes in new driver patterns, lack of city or county road repair, and disregard for traffic laws can complicate intersection safety and increase traffic risks. Dangerous intersections can also be identified by having heavy traffic congestion, poor signage and street lighting, discontinuous sidewalks, or has a reputation as an area with aggressive and speeding drivers, and heavy bicycle and pedestrian traffic. It remains imperative Michigan drivers become more aware of their surroundings when driving through any intersection and drive patiently, using the safe intersection driving lessons outlined below.

If all drivers followed even half of these lessons, Michigan could see improvements in intersection accidents rates. With that said, courteous driving at safe speed limits should remain the most important measures toward improving accident rates.

Michigan State Police Traffic Crash Reporting unit has identified which intersections had the highest number of car crashes in 2018. Here is a synopsis.

We have close look at Detroit’s most dangerous intersections here. Do you know of other intersections in Michigan that should be reviewed as dangerous?

If you have been injured in an intersection related accident, the vehicle accident attorneys at the Law Offices of Lee Steinberg are ready to use our decades of experience to get justice so you can move forward and start the healing process. Not only can a personal injury lawsuit help ease financial burdens, but it can help create change at a location, like a dangerous intersection, that poses serious risks to other users every single day.