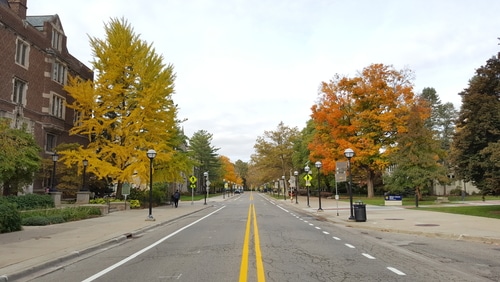 When most people drive or walk by the University of Michigan’s iconic painted “Rock” at the intersection of Washtenaw Avenue and Hill Street, the last thing they expect is to be involved in a dangerous car or pedestrian accident. But our motor vehicle accident injury team at The Law Office of Lee Steinberg recently took a look at the reported troublesome intersection using the Michigan Traffic Crash Facts (MTCF) tool used to collect and report accident information across the state and came to some striking conclusions. Our research calculated an estimated 245 crashes at the intersection of Washtenaw Avenue and Hill Street from 2008 to 2017. Alarming of all is that the historic intersection’s crash trend continues to be on the rise. In 2017, the number of crashes almost doubled from 2016 incidences. Residents and everyday travelers of the intersection have started to speak up against the dangerous intersection and many say the sloping road, poor and dated design, illegal left turns, dim lighting, bad driver behaviors such as distraction and the high interchanging speed limit to 45 miles per hour all contribute to the higher accident risk on the state-owned road. Lack of pedestrian safety is also a concern among residents, business owners, and students who frequent the intersection. Serious injuries resulting from crashes between motor vehicles and pedestrians across the state has also become a rising concern in recent years.

Most Common Causes of Intersection Crashes

With that said, alert and sober driving at safe speed limits should remain important measures toward improving all motor vehicle accident rates.

Pedestrian safety should also be a high priority when evaluating intersection crash trends. But until changes are set into motion at Washtenaw and Hill, the Lee Steinberg Law Firm urges motorists to follow general, common-sense road safety rules for interacting with pedestrians such as following traffic laws, staying alert, following speed limits, staying in your lane, and avoiding distractions like texting or eating while driving.

We have been reviewing some of Michigan’s most dangerous intersections for some time now, but want to know what you think about the crossroad of Washtenaw Avenue and Hill Street? Does it need updating? Or, are Michigan driver behaviors simply worsening?

If you have been injured in an intersection related accident, the vehicle accident attorneys at the Lee Steinberg Law Firm are ready to use our decades of experience to get the justice you deserve so you can begin the healing process. Not only can a personal injury lawsuit help ease financial burdens, but it can help create change at a location, like a dangerous intersection, that poses serious risks to Michiganders every single day.