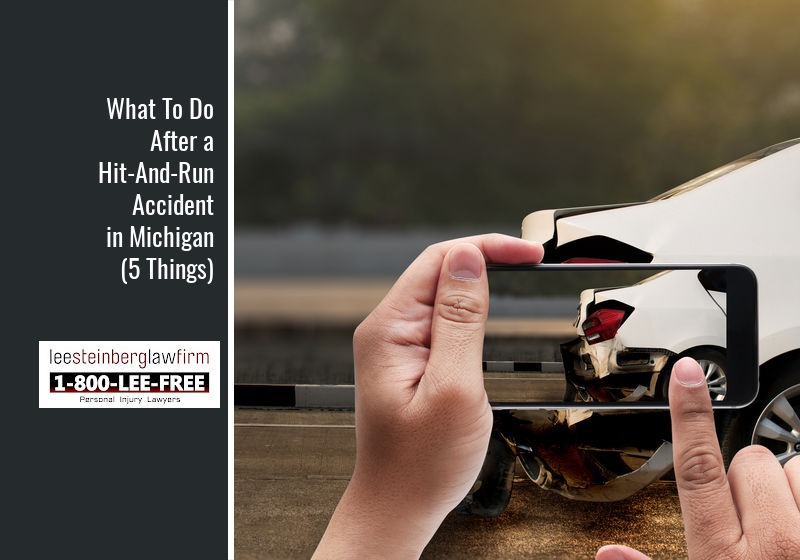 What Should I Do After a Hit-and-Run Accident in Michigan?

Hit-and-run accidents are very frustrating. Not only do you have a car or truck that must be repaired or is totaled, but the person responsible for the crash fled the scene and won’t be held accountable for what they did. In more serious situations, a hit-and-run driver can cause bad injuries, including broken bones, back pain, neck pain as well as pain and suffering.

An experienced and aggressive Michigan hit-and-run lawyer can help make sure you get financial compensation and benefits, even if injured by a hit-and-run driver.

#1 – Call the Police and Make a Police Report

How do you report a hit-and-run accident? This is simple. If the other driver involved in the crash leaves the scene, it is essential to call the police and to stay at the accident scene until they arrive.

First, the hit-and-run driver may be dangerous. Law enforcement should be made aware of what happened to protect others in the community. Second, the police can investigate the accident scene, review video surveillance footage, interview witnesses and discover other clues to help find the hit-and-run driver.

The police will also get your statement and side of the story. This is important later when making a claim for car damage or a Michigan no-fault claim.

#2 – Why is a Police Report So Important after a Hit-and-Run Accident?

This was exemplified in the recent case, Wasik v. Auto Club Insurance Association (docket no. 355848, published on June 2, 2022). In Wasik, the plaintiff’s girlfriend was driving her car. The plaintiff was the passenger in his girlfriend’s vehicle when they were rear-ended by a Ford Explorer. The girlfriend and the driver of the Ford Explorer pulled over and inspected their vehicles for damage. On finding no damage to her vehicle, they mutually agreed not to contact the police. Both the plaintiff and his girlfriend never even got the at-fault driver’s information.

Following the crash, Mr. Wasik began to experience concussion like symptoms. He went to the emergency room that night. He then filed a claim for both Michigan no-fault PIP benefits and an uninsured motorist (UM) claim through Progressive Insurance (the insurer of plaintiff’s mother’s vehicle) and AAA Insurance, his girlfriend’s insurance carrier.

An uninsured motorist claim is a claim for pain and suffering when a person is injured by an “uninsured” motor vehicle. Because the at-fault vehicle is not insured, you can turn to your own insurance company, or the carrier of the vehicle you occupied, for money for pain and suffering. UM coverage is only available if it is purchased. In addition, insurance carriers have very strict rules for when UM coverage applies. These rules are always found within the insurance policy itself.

In the Wasik case, both insurance carriers filed a motion to dismiss the UM claim. They argued the “hit-and-run vehicle” involved in the crash was not really an “uninsured motor vehicle” as defined by the insurance policies. The trial court in Oakland County sided with both insurance companies, dismissing the plaintiff’s UM case.

The Michigan Court of Appeals affirmed the lower court’s ruling. In doing so, the Court said because uninsured motorist coverage is not mandatory and not mandated by law, the insurance policy language alone controls the circumstances entitling a person to an award of benefits. In analyzing both insurance policies, the Court found that a “hit-and-run vehicle” means a vehicle that hits another vehicle and the driver leaves the scene of the accident – either without stopping or at any time before an exchange of information can take place.

In this case an exchange of information could take place. The plaintiff and his girlfriend just decided not to do so. In addition, they also decided not to contact the police. As a result, the plaintiff was not eligible for uninsured motorist benefits under either the Progressive or AAA Insurance policies.

In the Wasik case, the plaintiff made two bad choices. First, he should have at least gotten the vehicle information, insurance information, name, and address of the at-fault driver. Second, he should have called the police so the local law enforcement could have done a full investigation. To prevent fraud, most insurance policies require a police report be filed within 24 hours of the crash.

#3 – Try to Get As Much Information as You Can

While still at the accident scene, try to get as much information as you can. Try to identify the make and model of the fleeing vehicle. Get as much of the license plate information as you can. Take photos of your vehicle damage. Use your cell phone to video tape the accident scene. Get the names and telephone numbers of any witnesses. Find out what they know. And again, call the police and stay there until they arrive.

Car crashes are scary events. Your adrenaline is pumping. Often, injury victims don’t realize how badly they are injured while at the accident scene. Sometimes, internal injuries are severe and cannot be easily identified. That is why it is always important to call 911 and ask for emergency personnel to come the accident scene. An EMT or emergency medical technician can assess your medical situation. They can quickly get you to the hospital. This can mean the difference between a short hospital stay or a long one. It can even save your life.

It is very important to understand your legal rights following a hit-and-run accident. This is especially the case in Michigan. Because Michigan is a no-fault state, you may still be entitled to no-fault PIP benefits even if you don’t have auto insurance.

These benefits can pay for all your medical bills, pay for lost wages, out-of-pocket costs, prescriptions, and other items.

Like the plaintiff in the Wasik case, even if the at-fault driver is not identified, you may still be able to make a claim for pain and suffering compensation through uninsured motorist coverage. This is true even if you don’t have car insurance of your own.

Under many car insurance policies, the insurance company for the car you occupied at the time of the crash, or the car insurance of a resident relative, may be on the hook to pay for pain and suffering you sustained from the crash.

The Michigan hit-and-run attorneys at the Lee Steinberg Law Firm have collected millions of dollars for individuals injured by hit-and-run drivers. Call us toll free at 1-800-LEE-FREE (1-800-533-3733) after a crash. Our Michigan hit-and-run accident law firm can answer your questions, quickly review your case, and get the wheels of justice moving for you and your family. And we never charge anything until we win your case.