Who's Liable in a Rear End Collision in Detroit?
Skip to content 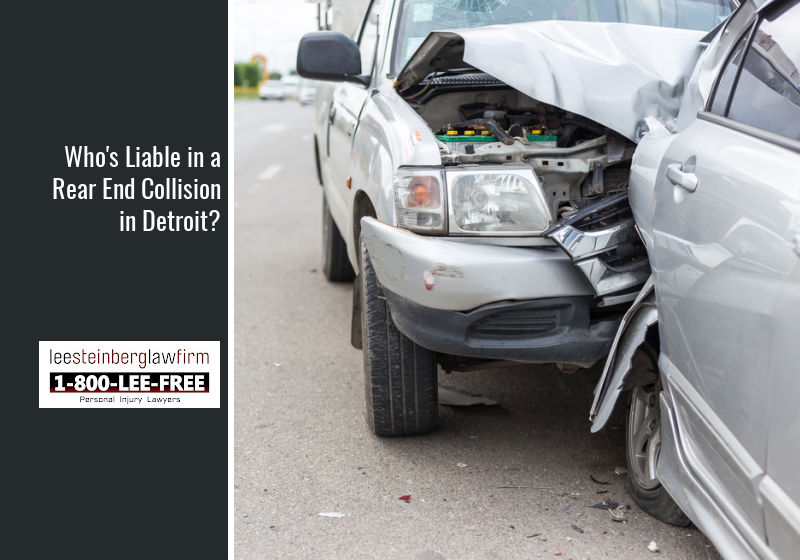 Did you know that there were 282,640 car accidents in Michigan last year? And of those accidents, there were 1,131 fatalities.

We often get clients asking who is responsible for rear end collisions. Unfortunately, there is no easy answer.

When it comes to any accident, including rear end collisions, the driver whose negligence caused the accident is the one who will be held liable. Of course, people then want to know who the negligent driver is—the one in front or the driver in the back who did the rear ending?

In most cases, the rear driver is often the one responsible and at fault. However, there are some situations where this is not true, and it could be the driver in front or even another party that is to blame.

What Causes a Rear End Collision?

Like any accident, a rear end collision can happen for any number of reasons at any time. However, these accidents most often happen at intersections or when traffic is traveling at high speeds, such as on the highway.

Behaviors and factors that most commonly contribute to rear end collisions include the following:

So, for the first law listed, this essentially means that the rear driver will automatically be deemed negligent and at fault, UNLESS through evidence and testimony, they can prove otherwise and overcome the presumption of guilt.

For the second law listed, it means that drivers must drive at a reasonable speed with consideration for traffic and road conditions. So if traffic is congested or if the roads are wet and slippery, you must drive slower and be more careful. If you do not drive at a reasonable speed with these road conditions in mind and you cause a rear end collision, you can be deemed negligent and at fault.

Who is At Fault in a Rear End Collision?

However, as stated above, rear drivers can overcome the automatic presumption of guilt if they can provide evidence and testimony that shows that another party is at fault. For example, the front driver could be at fault instead if they had broken brake lights or if they backed up without looking.

It is also possible for a third party to be held liable. For instance, if the rear driver’s brakes failed, causing them to hit the front driver, they could potentially hold the car manufacturer liable if the failure was due to a defect that the driver was unaware of.

What is the Total Payout for a Rear End Collision?

Compensation or payout for a rear end collision will vary based on the individual situation and a variety of factors.

First, Michigan is a no-fault state, which means drivers must first file a claim through their own No-Fault PIP insurance. This will provide them with compensation no matter who is at fault for the accident.

If the no-fault benefits are not enough to cover all damages, it is possible to file an additional claim or lawsuit against the guilty party for further compensation, but only if certain thresholds are met. In this case, you will also be required to provide sufficient evidence to prove that another party was at fault and that you suffered excess damages as a result of their negligence.

It is also important to note that Michigan is a comparative fault state, which means your compensation could be reduced if you are partially to blame for the accident. Essentially, the amount you can recover will be comparative to your percentage of fault. So even if another party is primarily responsible, if you are 10% to blame, your settlement will be reduced by 10%.

The best way to get a high-value settlement in a rear end collision is to work with an attorney. Proving fault can be a challenge enough on its own, let alone having to fight with insurance companies to make sure they pay you the compensation you deserve. But with an attorney on your side, they can handle all of the difficult legal matters for you and stand up to insurers to make sure they pay you a full and fair settlement.

At The Lee Steinberg Law Firm, our car accident lawyers have years of experience handling Michigan rear end collision claims. We can help you navigate your claim, ensure the right party is held liable, and get you the full and fair settlement you deserve.