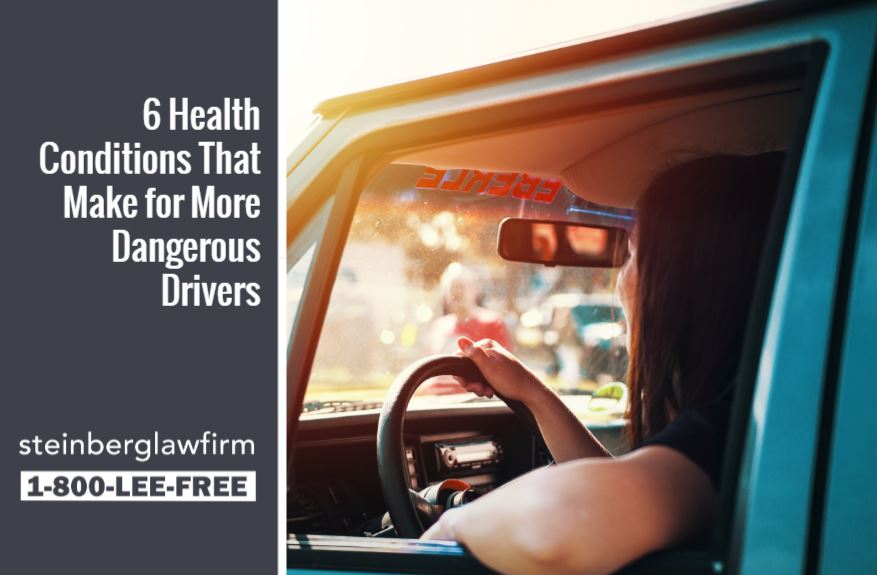 Watch Out for Drivers with These 6 Health Conditions

Many health conditions can affect a person’s ability to safely operate a motor vehicle. And even small changes in someone’s general well-being can create medical emergencies on the road that lessen a driver’s response time, cause a lack of control over a vehicle, and the ability to judge situations and make good driver choices. Michigan law authorizes the Department of State to ensure all drivers meet several physical standards or vision standards before being issued a driver license.

Those limitations include drivers with disabilities and health conditions that create episodes:

“Disability” means a reduction in mental or physical skills which are necessary to safely operate a motor vehicle, while an “episode” means a health condition which causes or contributes to any of the following:

Health conditions which cause impairment of an individual’s driving judgment or reaction time or affects an individual’s ability to safely operate a motor vehicle or contributes to a violent or aggressive action also apply to the Michigan Department of State’s standards for safe driving.

Epilepsy is a neurological disorder that causes recurring convulsive seizures and a temporary loss of awareness or consciousness, obviously making driving dangerous. Many people with epilepsy will be subject to restricted driving privileges unless they can prove that the condition is controlled and that they have been seizure-free for some time, according to SafeWise. In Michigan, drivers with epilepsy may only operate a motor vehicle if they’ve been seizure-free for a period of 6 months to 1 year.

Drivers with Attention-Deficit/Hyperactivity Disorder (ADHD) tend to be at higher risk for having accidents, impulsive driving behaviors, hyper focusing, and driving without a license and make careless mistakes challenged by general inattentiveness and distractibility.

Drivers diagnosed with ADHD need to be especially aware of their driving abilities as part of their behavioral management. Parents of teen drivers with ADHD and treating physicians are also responsible for establishing safe driving barriers.

Visit the National Institute of Mental Health to learn the warning signs of ADHD, which includes inattention, hyperactivity, and impulsivity.

The 2018 Michigan Annual Drunk Driving Audit released on July 1, 2019, by Michigan State Police provides detailed information concerning traffic fatalities and related injuries involving alcohol and drugs. A total of 9,786 accidents resulting in 315 deaths and 5,392 injuries represents 43.5 percent of the total fatal crashes involving alcohol and drugs in Michigan. Subsequently, the American Psychiatric Association states that drivers with substance abuse disorders, such as alcohol or drug addiction have “a brain disease that is manifested by compulsive substance use despite harmful consequence.” These addicts may have distorted thinking and body functions that make them more likely to adopt dangerous operator behaviors.

And remember, in no circumstance, should anyone ever drive after taking drugs or drinking alcohol.

Older drivers have relatively higher incidences of crashes precipitated by drivers’ medical emergencies when compared to young and middle-aged drivers, according to The National Highway Traffic and Safety Administration. This is because, over time, elderly drivers may naturally begin to lose functions vital for driving, such as:

Medications used by older drivers who are suffering from diseases such as arthritis, cancer, or memory illnesses may create adverse side effects known to cause serious car accidents. Older drivers are also easily confused about common driving practices taught today in driver education such as what to do if you approach a flashing yellow turn signal, navigating roundabouts and circular intersections, and the importance of traveling with the flow and speed of traffic.

Macular degeneration and glaucoma are common eye diseases that can cause blurriness and blind spots throughout a person’s field of vision. Drivers with vision disorders may have trouble noticing pedestrians, bicyclists, motorcycles, traffic signs, or seeing cars about to cross their path.

Likewise, drivers who are prescribed prescriptive lenses and glasses but fail to wear them while operating a motor vehicle may also prove to be a preventable hazard to others.

Driving drowsy can be just as dangerous as driving drunk and over half of these types of crashes involve drifting into traffic head-on or off the road completely. To avoid becoming a drowsy driver, adopt a healthy sleep routine and share driving responsibilities with other passengers.

Some drivers do not realize their driving skills have deteriorated due to a newly diagnosed health issue or injury. Other conditions known to impact a person’s driving capabilities can include:

Although challenging, family members, friends, and physicians may need to restrict driving or discontinue the loved one’s operating of a motor vehicle altogether. If that doesn’t work, reporting an unsafe driver may seem dramatic, but in some cases, it may be the only way to handle a serious situation and help reduce their car crash risk or injury, including death, to others.

Talk to Us About Your Michigan Car Accident

If you have suffered injuries caused by a driver with a health condition who should not have been driving, you may be entitled to compensation to help cover related medical costs, income loss, and recovery needs.

Please share your accident story with our motor vehicle accident attorneys at 1-800-LEE-FREE (1-800-533-3733) or fill out the Free Case Evaluation Form. And remember, you pay nothing until we win or settle your case.