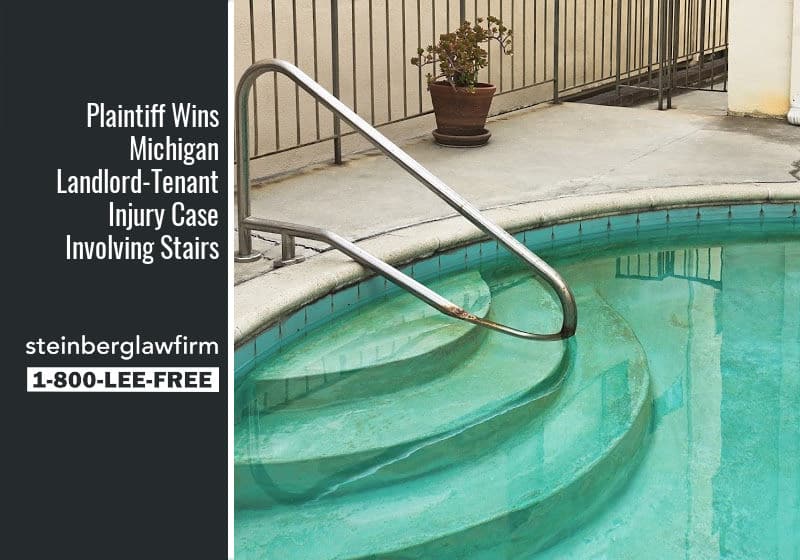 The Michigan Court of Appeals just issued a decision in a landlord-tenant injury case that was interesting. The Lee Steinberg Law Firm, P.C. have represented tenants injured due to the negligence of a landlord or property management company for decades. Often, the injuries occur due to a defective handrail, porch, stairs or snow and ice on the property that was not removed.

When these accidents happen, the injuries can be life changing. We have represented clients who have sustained broken legs, broken arms, knee injuries including torn ACLs and torn meniscus, elbow fractures, back injury, neck injuries, vertebrae fractures, brain bleeds, concussions another ailments from an injury on their rental property in Michigan.

However, the laws in Michigan do not make these cases very easy for injured tenants to pursue. The landlord and property manager can use a lot of defenses when fighting tenant negligence injury cases and have been very successful in getting these claims dismissed by judges throughout Michigan.

But in Sedlecky v. Sun Communities Inc., docket no. 348520, (unpublished, 8/20/20), the Michigan Court of Appeals have permitted an injured tenant to move forward with her claim for pain and suffering due to the negligence of the landlord. The reasoning the Court used is informative and impacts future rental injury cases in Michigan.

In Sedlecky, the plaintiff was a tenant at a mobile home community and was injured while entering the swimming pool on the pool stairways. The plaintiff file a lawsuit against the landlord and owners of the property, alleging the stairway in the pool did not have slip-resistant treads, did not have steps with contrasting colors on the front edge, failed to have a handrail that met code and the handrail was not reachable for the length of the stairway.

The defendants denied these allegations and asked the trial judge to dismiss the claims. In doing so, the defendant argued the slippery nature of the stairs were open and obvious, and that the steps – which were a common area – were fit for their intended use and therefore no violation of MCL 554.139 occurred. The trial judge in Kent County agreed and dismissed the case. The plaintiff appealed.

The Michigan Court of Appeals reversed the trial judge’s ruling, allowing the plaintiff to proceed with her case for pain and suffering compensation resulting from her injuries in the swimming pool.

(1) In every lease or license of residential premises, the lessor or licensor covenants:

(a) That the premises and all common areas are fit for the use intended by the parties.

(b) To keep the premises in reasonable repair during the term of the lease of license, and to comply with the applicable health and safety laws of the state and of the local unit of government where the premises are located, except when the disrepair or violation of the applicable health or safety laws has been caused by the tenants willful or irresponsible conduct or lack of conduct.

The Court in Sedlecky found there was no dispute the swimming pool where the plaintiff fell was a common area. Because it was a common area, the landlord only had a duty to ensure it was fit for its intended use. There is no obligation to ensure it was in reasonable repair. However, per the Trueblood decision, under MCL 554.139(1)(b) a landlord’s covenant to comply with local health and safety laws is distinct from its covenant to make reasonable repairs. In other words, the defendants have a duty to its tenants to ensure the swimming pool complied with Michigan health and safety laws.

The Court found there was a question of fact as to whether the defendants failed to comply with Michigan administrative rules governing public swimming pools, R 325.2134(4). There was evidence the defendants did not have slip-resistant treads on the pool stairs, that the front edge of each step was not marked in a color that was different than the background, and that the handrails were not code compliant. In finding a question of fact, the Court ordered the case be remanded to the trial court to allow the plaintiff to proceed to a jury.

The Court also held that based on the facts presented, which included an affidavit from the pool attendant, there was a question of fact as to whether the swimming pool steps were not fit for their intended use, in violation of MCL 554.139.

The primary purpose or intended use of a stairway is to provide pedestrian access to different levels of a building or structure. The Court found there was evidence that the swimming pool steps had little to no slip-resistant tread on the step where plaintiff fell, and there was no marking on the front edge of the step that contrasted with the background. Therefore, the primary purpose of the steps was not met.

The Court’s decision in this case is important for a number of reasons. First, it follows prior Court of Appeals holdings that have held that landlords are responsible when a stairwell or stairway they are charged with maintaining is not fit for its intended use in some way. This is important because some trial judges dismiss cases involving stairs and stairwells, believing that so long as anybody could have walked on the steps they were for their intended use. This case again helps dispel that notion.

Second, the Court’s reasoning that landlords are responsible for the health and safety of its tenants – even in common areas like a swimming pool – follows the precedent set in Trueblood and is a profound change in the duties owed to tenants by landlords. Tenants can now use state administrative codes, ordinances and guidelines to argue a landlord failed to keep the common area safe for its tenant. This duty has always been in the landlord-tenant statute, but the Sedlecky case helps illustrate this duty and gives circuit court judges guidance on how to rule on similar cases.

This is important because it allows plaintiffs to use the full weight of building codes and state regulations to assert a duty on landlords that typically have not been permitted in the past.

The Lee Steinberg Law Firm, P.C. will follow similar cases as they are issued by the Michigan Court of Appeals in the future. If you or a loved one has been injured to the negligence of a landlord, please call us toll free at 1-800-LEE-FREE (1-800-533-3733). We never charge a penny until we win and our dedicated Michigan tenant injury lawyers are standing by ready to answer your questions.