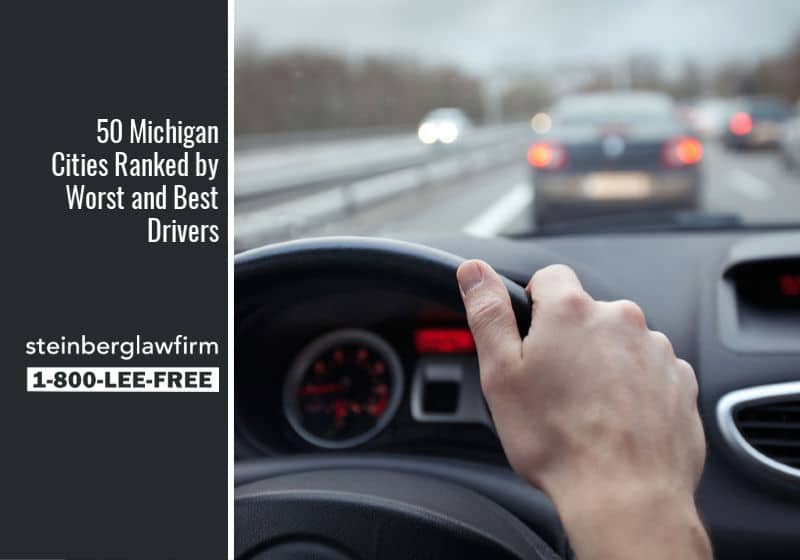 Where Does Your City Rank Among Michigan’s Best Drivers?

The cost of car insurance is the topic that typically makes Michigan headlines related to drivers – but not this time. Michiganians have practiced enough good driving behaviors to rank their cities for having some of the best drivers and the results are pretty accurate based on other similar reviews. QuoteWizard.com published a report in May 2019 ranking the most populated cities in Michigan by overall driver quality using data from over 500,000 insurance quotes. The analysts ranked these communities by the highest rate of incidents such as accidents, speeding tickets, DUIs, and traffic citations.

According to the review, 50 of Michigan’s largest cities listed below were ranked 1 thru 50 from worst (Holland) to best drivers (Holt).

The study concluded these percentages of Michigan’s good and bad driving behaviors:

Using data from the U.S. Department of Transportation’s National Highway Traffic Safety Administration (NHTSA), a 2018 report by Car Insurance Comparison, ranked Michigan as a best driver state by measuring fatality rates, drunk driving, speeding and other habits of both good and bad drivers. And in January 2019, Michigan’s insured drivers also placed among the best in the country by an independent driving study for falling below the national average in crash fatalities.

Holt is a smaller city in Ingham County with a population of just 23,000 people. Drivers in this city naturally aren’t dealing with commuter congestion, bottleneck traffic, or high-risk drivers.

The report’s authors called the Flint area “The hub of the best drivers in Michigan … with neighboring Burton right behind Flint at third best in driver quality.” It’s the seventh-largest city in Michigan, with surprisingly fewer occurrences of bad driver behaviors proving any city can be a safe place to drive.

Settled in Genesee County, with a generally low percentage of road fatalities each year, Burton was ranked as a good driver city because of drivers who follow traffic laws and practice safe driving such as obeying the speed limit.

So, What Makes a Bad Driver?

Unfortunately, not every driver in Michigan resides in a best driving city, because many motor vehicle operators continue to fail at following the simple rules of the road. According to QuoteWizard.com, those cities include Holland, Livonia, Rochester Hills, Southgate, and Royal Oak because of drivers who cause major personal injuries to others with their accident-prone driving decisions. Drivers in these cities are more likely to be speeding, violating traffic laws, driving while distracted, are aggressive, and driving under the influence of drugs or alcohol.

For these specific drivers, the motor vehicle accident injury attorneys at The Lee Steinberg Law Firm have gathered some easy reminders on how to be more courteous and less of a risk on the road to themselves and others.

Don’t be shy in sharing this advice with someone you know is a lousy driver and living in one of the worst driver cities listed.

If you or a family member is a victim of an accident caused by a reckless or careless driver in any Michigan community, be sure to seek out the qualified advice of a car accident attorney before discussing the accident with an insurance company. The Lee Steinberg Law Firm, P.C., has been representing accident victims for over 40 years, and we can help you through this difficult time.