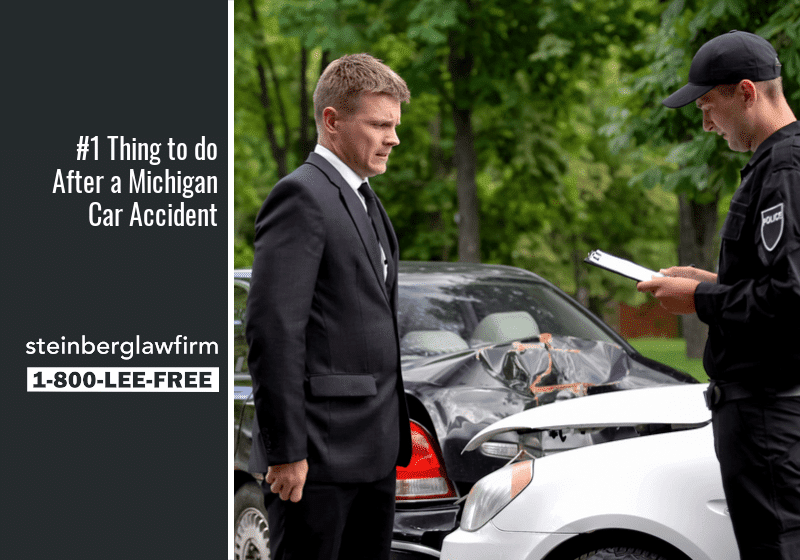 There are a lot of things to think about after getting involved in a Michigan car accident. There is the initial shock of the event. Then there are the thoughts about the damage to the car, the cost of the repairs and how you will get around following the crash. If you are in pain, there is the fright of being injured and having your life potentially changed upside down. Thoughts about going to the hospital, seeing doctors, surgery and physical therapy enter your mind. And who will pay all those bills? And the lost wages?

Calling the police is so important after a collision in Michigan. And the reasons are numerous. So many things depend upon a police report following a crash, and without a report, so many things are infinitely more difficult to accomplish.

First, a police report will list the names, addresses and general information of all the drivers involved in the wreck. This is important because sometimes it is difficult, it not impossible, to get the information of the other parties while at the scene. The police will do this for you, and people are less likely to lie or give false information to an officer.

These items can be very difficult to recreate later. Getting that information from law enforcement at the accident scene is vital.

A police officer will conduct an investigation into the cause of the auto accident following the crash. Police officers can take witness statements, talk to all the drivers, pull video from nearby locations, and sometimes conduct full accident reconstruction to evaluate the cause of a wreck.

Accident reconstruction can include evaluating the speed of the vehicles, tire marks, vehicle collision damage and impact to formalize an opinion as to the cause of the accident. This information may be invaluable down the road and can assist an injured person in proving the negligence of a driver in court.

Although the police report itself is hearsay, when a responding officer is asked to testify as a deposition, he or she can use the police report they prepared to refresh their memory. They can then use the report to offer opinions as to who caused the accident and why.

In addition, police reports are often required to make a claim for uninsured motorist (UM) or under-insured motorist (UIM) benefits. In Michigan, more than 25% of drivers are operating their vehicles without insurance. In cities like Detroit or Flint, that number is even higher.

Therefore, it is important to purchase uninsured motorist, or UM coverage. This coverage pays pain and suffering and even economic damages such as lost wages and medical expenses when the at-fault negligent driver failed to have auto insurance at the time of the crash.

In these situations, if you have UM coverage (it’s not mandatory) on your own auto insurance policy, you can turn to your carrier for compensation. This is why we spend the big bucks when purchasing auto insurance – for situations when you are injured and need assistance.

Involved In a Ride-Sharing Crash? – Make a Report

One of the most common occasions a police report is not made is following a Michigan motor vehicle crash involving a ride sharing car, such as Uber of Lyft. The drivers for these companies are often afraid of the consequences of making a police report. They don’t want to get penalized by Uber or Lyft for having a collision on their record. Others are worried it will affect their auto insurance. Most just don’t want to “deal” with the situation.

But the passengers are the ones who are forced to deal with the negative consequences of not having a police report. So if you are ever involved in a Lyft or Uber car accident, call the 911 and make a police report yourself. Make sure the driver stays at the scene until the police arrive. If the driver is being uncooperative or combative, get out of the vehicle and call the police anyway. You should have the driver’s basic information on your phone app, so there is no way the driver can get away with the crash.

If it is impossible to stay at the scene for some reason before the police can arrive, get the make, model and license plate information of all the vehicles involved. Take pictures at the accident scene. Get the Uber or Lyft driver’s full name if necessary. Then make a police report as quickly as possible at the nearest police station or precinct. Make sure you do it within 24 hours of the crash. When you make the report, be sure to include as much information as possible to the police, in particular the name of the Uber or Lyft ride.

Have You Been Injured in a Car Accident?

If yes, we don’t have to tell you about the difficulties of recovering from a serious accident or caring for an injured loved one. We know you understand far too well how hard it can be to heal while ensuring your whole family is cared for physically, emotionally, and financially.

The Michigan auto accident attorneys at the Lee Steinberg Law Firm, P.C. understand your situation well, and we have a long history of representing vulnerable clients. Our greatest satisfaction comes from winning or settling a case and knowing our clients’ can rest easier knowing their medical care, lost wages, and other expenses are taken care of.