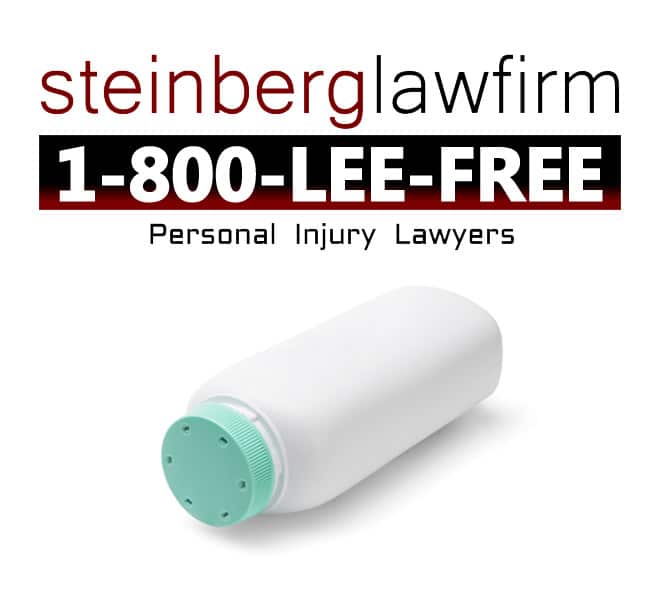 The attorneys at The Law Offices of Lee Steinberg are reviewing claims of women who developed ovarian cancer after using talc-based baby powder around their genital area, including on underwear, tampons, and sanitary napkins. Health product company Johnson & Johnson (J&J) is currently facing 1200 pending lawsuits over claims the talcum powder in their baby powder products caused cancer in hundreds of women. Evidence continues to mount against J&J, and it is possible that many Michigan women and their families have been grievously harmed by dangerous products and do not even know it.

Talc, the primary ingredient in talcum powder, has been raising red flags for decades, with some evidence of the dangers of the powder going back over fifty years. Talc, in its natural mineral state, does contain asbestos and is known to be carcinogenic; however, cosmetics and other health care products have used asbestos-free talc since the 1970s. Despite the use of asbestos-free talc since the early 70s, there have been more than 20 research studies whose findings have stated a link between the use of talc-based powders and ovarian cancer.

Johnson & Johnson Knew the Risks and Failed to Act

Johnson & Johnson has long marketed its baby powder as a useful product for absorbing moisture, especially for use as a feminine hygiene product and for babies’ diaper areas. Serious concerns about talc usage arose, both as a feminine hygiene product and as a component of other cosmetic products that might result in inhalation of the powder. Despite these concerns, Johnson & Johnson continued producing and promoting potentially dangerous products, such as Baby Powder and Shower-to-Shower, with no additional warnings to its customers.

An analysis of multiple studies show the risk of ovarian cancer goes up 33% for regular users of baby powder, and one terrifying study finds use of baby powder on the genitals increases the risk for ovarian cancer by 92%. The World Health Organization’s (WHO) International Agency for Research on Cancer published a report finding talc to be “possibly carcinogenic.” Studies of cancerous tumors from these victims leave no doubt, finding talc particles embedded deeply in the cancerous tissue.

Despite full knowledge of the link between talcum powder and ovarian cancer, Johnson & Johnson failed to provide consumers with this information. There was no additional labeling or warning added to products that focused on use of their products in feminine hygiene even though there were inhalation warnings added after cases of talc inhalation poisoning and mesothelioma (related to asbestos-containing powder) arose.

Michigan cities with large African-American communities, such as Detroit and Flint, may house a disproportionate number of victims. Memoranda from recent court cases show evidence that Johnson & Johnson specifically targeted African-American women with advertising after sales dipped due to health concerns. This advertising capitalized on years of false and racially motivated campaigns focused on the hygiene of women, especially feminine odor. A new study coming out of the University of Virginia Charlotte unmasks the negative effects of the advertising.

Joellen Schildkraut, a UVC epidemiologist, was skeptical of the claims linking baby powder to ovarian cancer until her own research indicated otherwise. Partly as a result of the racially-charged, false, and historically negative focus of advertising on Black women’s bodies and personal hygiene, Black women are much more likely to use powder in the perineal area than their White or Hispanic counterparts.

Schildkraut knew this and focused her recent study on black women in the Southern, Eastern, and Midwestern United States. Her research team interviewed over 1300 African-American women, 584 of whom had been diagnosed with ovarian cancer. They found almost 63% of the subjects with ovarian cancer had used powder as a vaginal hygiene product. 53% of the subjects without ovarian cancer had also used the product. The study shows an increase in cancer risk regardless of where the individual used the powder, but those who used the products on their genital areas had a higher risk. The increased risk for these users was over 40%.

Several recent court cases have opened the doors to justice for women and their families who have suffered or died from ovarian cancer related to use of baby powder products. In 2013, a Midwesterner named Deanne Berg became the first woman to receive a favorable outcome. Berg, who was diagnosed with ovarian cancer in 2006, was estimated to have applied products containing talcum powder at least 8,000 times in her lifetime. The court found J&J liable but oddly, decided not to award any damages.

More recently, there have been two huge victories for victims of J&J baby powder products. In February, the family of an Alabama woman who died of ovarian cancer after using J&J products for 40 years, was awarded $72 million. In May, a cancer survivor from South Dakota, was awarded $55 million.

A class action against Johnson & Johnson has been filed, but this action only seeks to recover compensation for the purchase of the products. The class action is not limited to those who have been diagnosed with ovarian cancer. For this reason, the class action is probably not the best choice for victims who were diagnosed with ovarian cancer. Unlike an individual lawsuit, the class action cannot provide victims with compensation for medical bills, lost wages, pain and suffering, and funeral expenses. If you believe you or a family member were harmed by J&J products, we urge you to give us a call to consult on your best options for pursuing maximum compensation for the illness and pain caused knowingly by Johnson & Johnson.

With offices in Detroit, Flint, Saginaw, and Farmington Hills, The Law Offices of Lee Steinberg are positioned to help the victims of Johnson & Johnson’s dangerous products throughout Michigan. If you or a loved one were a regular user of products containing baby powder and were diagnosed with ovarian cancer, please call Lee Free and speak to our expert attorneys at 1-800-LEE-FREE (1-800-533-3733). You can also contact us by filling out our simple Free Case Evaluation Form.