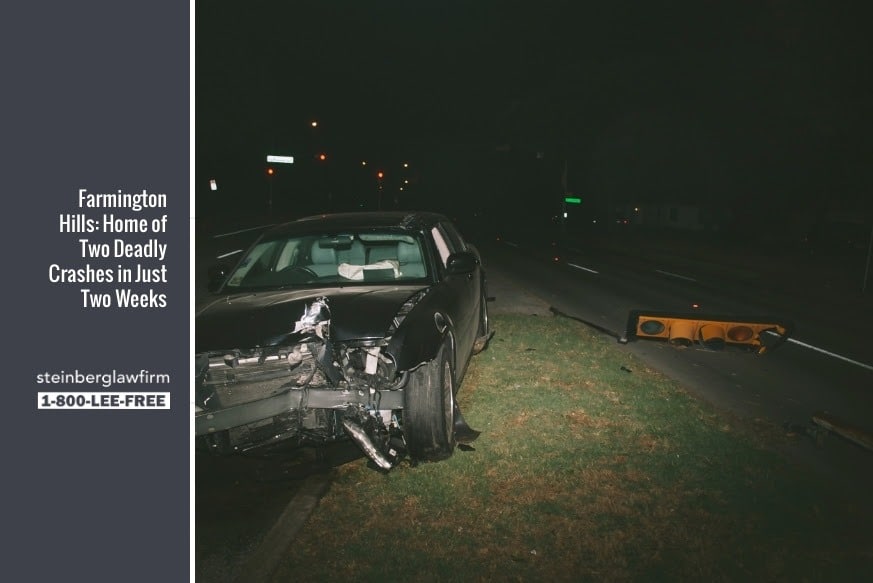 Michigan’s Farmington Hills sits in Oakland County. It is a suburban community home to both young commuting professionals and retirees adding to a growing population of 81,000. Sadly, the northwestern suburb of Metro Detroit was recently the location for two deadly crashes resulting in three related fatalities in a short span of just two weeks.

Two pedestrians died after being struck by a vehicle while trying to cross 12 Mile Road near Orchard Lake, as reported by Farmington Hills Police. A mother and her child were crossing the road around 10 p.m. when they were hit by a vehicle and killed. Police say the driver did stop at the scene. This is the first double fatal pedestrian accident in Farmington Hills this year.

Congested cross-traffic shared between motorists and pedestrians has made this one of the state’s most dangerous intersections. Michigan State Police traffic crash reporting unit documented 144 crashes at this intersection in 2018.

Pedestrian accidents can happen on any roadway including intersections, parking lots, roadsides and shoulders, parking lanes and no parking zones, bicycle lanes, sidewalks, medians and crossing islands, driveway accesses, shared-use paths or trails, and even in non-traffic areas.

September 8: Rollover Crash at the intersection of 11 Mile and Inkster roads

A weekend night rollover collision involving two vehicles in Farmington Hills left one driver dead and another in the hospital recovering from serious injuries, police told the Detroit Free Press. The accident happened at the intersection of 11 Mile and Inkster roads. Witnesses said that one vehicle was traveling southbound on Inkster and the other was heading eastbound on 11 Mile before colliding.

In July, two people died in a Farmington Hills crash in the area of Eight Mile and Inkster Road. Local police said a westbound car on Eight Mile struck a southbound vehicle on Inkster Road. Both cars had only one occupant, the drivers, and both died.

As crash investigations continue, our experienced legal team will continue to encourage all Michigan drivers to do their part in helping prevent further traffic fatalities in these areas. If any of our blog readers were witness to either of these incidents, please call the Farmington Hills Police Department at 248-871-2610 and share what you know.

A good and bad driver report published in May 2019 ranked the most populated cities in Michigan by overall driver quality using data from over 500,000 insurance quotes. The analysts reviewed communities with the highest rate of incidents such as accidents, speeding tickets, DUIs, and traffic citations to create the list. Farmington Hills was ranked No. 21, closer to the worst end of the 50 Michigan driving communities included.

In addition, although there has been a slight decrease in total motor vehicle accidents as well as serious injuries and fatalities in the past year across the state, Michigan Traffic Crash Facts reports numbers are still higher than they were in 2015 and 2014. Drivers need to be more courteous and less of a risk on the road to themselves and others.

If you live in or travel through the Farmington Hills area, please review this safe driving advice and share it with others.

If you or someone you love was tragically killed in a motor vehicle accident in Farmington Hills or anywhere else in Michigan, you or your family may be entitled to compensation and survivors’ loss benefits to help with medical bills, lost wages, and pain and suffering.

Call The Lee Steinberg Law Firm today for a FREE consultation with one of our experienced Michigan auto accident attorneys: 1-800-LEE-FREE.